JULES BUCKLEY with the HERITAGE ORCHESTRA; The Breaks (Decca) 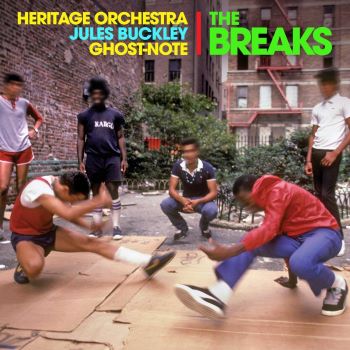 Home counties born, music polymath Jules Buckley has been releasing teasing tracks from  this album through the summer. First there was his version of ‘Apache’, then there was ‘X Breaks’ which was quickly followed by the cover of ‘Space Funk’. All three confirmed the promotional material that suggested that the parent album was to be joyous and intriguing celebration of “the much-loved, culture-defining music that birthed the Breaking scene and influenced hip hop and scratch DJs in the Bronx since the 1970s.” The album’s remaining 12 tracks don’t disappoint either; they perfectly fit the mission statement – all are big and brash memory jerkers and betray Buckley’s passion for the genre.

Amongst the featured tunes are ‘Give It Up and Turn It Loose’ (feat. Mr Switch), ‘Get On The Good Foot’, ‘Think’ (feat. Vula), ‘Dance To The Drummers Beat’ as well as well-loved and much sampled TV and cinema themes like ‘Theme From Swat’ . The big, swirling, all-enveloping sound comes via the Heritage Orchestra which was co-founded by Buckley with Chris Wheeler in 2004. At any given  time there can be between 45 -60 players so you can understand why we call the sound “big” and “all-enveloping”. Adding even more punch to proceedings is ‘Ghost Note’ – a percussion-based  collective based in Texas. Right now they’re headed up by Snarky Puppy’s multi Grammy-winning percussion duo of Robert ‘Sput’ Searight and Nate Werth. Adding to this guest list of Cecil B De Mille proportions are plenty of soloists.

Apart from those mentioned above, there’s input from Mr Talkbox, Mattiel and Kamasi Washington. The garlanded sax man adds his distinct tones to ‘It’s Just Begun’. Originally recorded by the Jimmy Castor Bunch, this new version is huge  and mightily percussive – but you could have guessed that from the guest list which we just outlined! Amongst the other highlights is ‘Ashley’s Roachclip’. The drum break from the original Soul Searchers’ track has been sampled countless times. This new tweak features input  from Cory Henry while the producers throw in snatches of ‘Pump Up The Volume for added intrigue, not that it’s needed. There’s plenty of interest and intrigue running through everything here!

Jules Buckley’s ‘The Breaks’ is good to go from September 3rd.