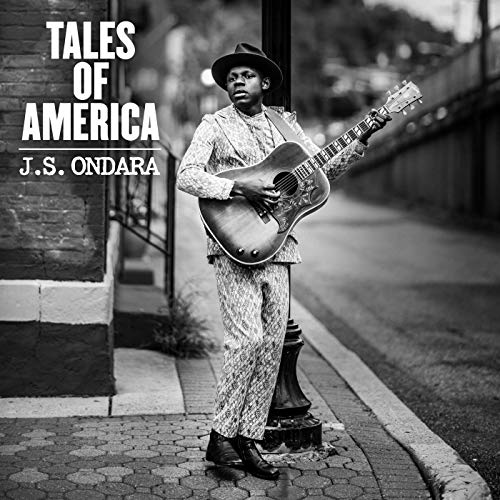 A black folk troubadour from Nairobi influenced by Bob Dylan and singing about the American Dream is probably a music publicist’s idea of heaven. That’s because there’s a great back story about desire, ambition, and raw talent triumphing over poverty and hardship. And to add to the drama and interest, there were sacrifices along the way – like leaving your homeland for another, not necessarily welcoming, country thousands of miles away and trying to survive as a stranger in a strange land.

If you’re of a cynical disposition, then you’re probably thinking, you couldn’t make this stuff up. And you’d be right, of course, because life is truly stranger than fiction. Just ask J.S. Ondara. It’s his life story that is outlined above and the great thing is that he has the talent to match it. Initially drawn to rock music in his native Kenya, he had a life-changing epiphany when he first heard a Bob Dylan record and it set him on the path to become a folk-oriented singer-songwriter. But he had to leave Africa and go to America – Minneapolis in Minnesota, to be precise – to realise his own personal dream. It was there he honed his craft, made an indie EP, which got played heavily on local radio, and eventually led him to grabbing the attention of Verve Records.

The first thing that strikes you about Ondara is his voice. It has a deeply haunting quality and is suffused with a raw, naked, emotional  honesty. He sings straight from the soul with a plaintive voice that has subtle inflections drawn from his hero, Bob Dylan, with hints of Tracy Chapman and Odetta, and which can go into an eerie falsetto register for the more intense passages in his songs. His music, too, with its folky cadences, goes straight to the heart. Accompanying himself with strummed acoustic guitar, his songs – storytelling parables of life and love expressed through memorable melodies –  have a clarity and straightforward simplicity that is refreshing.

As for his debut album, ‘Tales Of America’ is a love letter of sorts to his adopted home. Some might find Ondara’s infatuation with the land of Uncle Sam hard to swallow, especially given the country’s long history of bigotry and racial troubles as well as the controversy its incumbent and divisive president has brought, but he looks at things with the lucidity – rather than naivety – of an outsider’s eye.

The opener, ‘American Dream,’ despite its title, is a dark song  with a chugging, stripped-down backbeat that depicts a kind of nightmare scenario and shows that while Ondara has bought into the mythology of America he’s not totally sold on it.  Other highlights include the anthemic love song ‘Torch Song,’  which, with its choir-like background vocals, is particularly affecting. So too are the compellingly infectious ‘Good Question,’ ‘Days Of Insanity’ and ‘Saying Goodbye,’ the latter a plangent valediction whose lyrics are infused with a poetic quality. With its lone acapella vocal, ‘Turkish Bandana’ is different again and takes Ondara’s minimalist aesthetic to the Nth degree, though it results in a totally mesmerising performance. The album’s closing song, ‘God Bless America,’ isn’t, as you might expect from its title, a rousing triumphal anthem but rather, it’s a subdued song whose bittersweet refrain is “God bless America, the heartache of mine.”

Though the influence of early Bob Dylan (circa the 60s) is almost palpable at times – especially on the strident ‘Master O’Connor’ – Ondara has managed to find his own unique voice. This is an impressive debut and it will be interesting to see where he goes from here – whether he’ll deliver more of the same, or will explore other avenues.  Just for now, though, 26-year-old J.S. Ondara is living his own version of the American Dream. Let’s hope he enjoys the ride.