JR WALKER and the ALL STARS; Walk In The Night (SoulMusic Records) 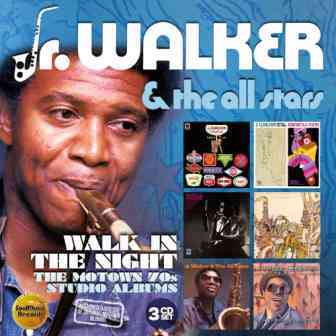 Though he was a consistent hit maker at Motown, Jr Walker never really fitted the label’s image. Born Oscar G Mixon or Autry DeWalt Mixon (depending on what sources you use), the rasping sax man came to Motown via kinks with Harvey Fuqua. You see, in 1962 Walker and his All Stars signed to Fuqua’s Harvey/Tri Phi label and when the ex Moonglow turned record company boss sold his labels to Berry Gordy, Walker came as part of the package. At first Gordy wasn’t quite sure what to do with the band; we’re told that he laughed when he first heard them! They sounded rough and raw – unsophisticated even… hardly the sound of Young America! However, Gordy was laughing on the other side of his face when Walker’s gutbucket, raunchy ‘Shotgun’ scaled the charts in 1965. More hits followed and the Arkansas-born sax man and reluctant singer was soon ensconced in the Motown pantheon.

There are any number of Jr Walker compilations out there chronicling the hits like ‘Shotgun’, ‘Shake And Fingerpop’ and the ever-gorgeous ‘What Does It take’. A number of the man’s key LPs have won reissue but oddly much of his later work at Motown has been sorely neglected … till now. Here, David Nathan’s SoulMusic Records offer 6 of Jr Walker’s 70s albums in one neat little box set. The albums are 1970’s ‘A Gassss’, ’71’s ‘Rainbow Funk’, ‘Moody Jr’ from 1972, 1973’s’Peace And Understanding Is Hard To Find’, 1974’s UK only-issue ‘Jr Walker And The All Stars’ and ‘Hot Shot’ from ’76. All are appearing on CD for the first time!

Across the set’s 58 tracks there are plenty of hits – stuff like ‘Walk In The Night’ and ‘Take Me Girl I’m Ready’ – alongside lots and lots of covers of both Motown songs and pop/rock hits. Of note are the two Stevie Wonder tunes, ‘You Are The Sunshine Of My Life’ and ‘All In Love Is Fair’ both of which feature the great man on harmonica. And though the sound of each album is dictated by the different producers – for instance the Clarence Paul produced ‘Jr Walker And The All Stars’ has a distinct jazz feel – the sound is still uniquely Junior Walker. Nobody quite attacked the sax like he did and his gruff, rough vocal was a real one off! Those unique qualities marked him out as a real star in the soul firmament. Little wonder Berry Gordy placed him on Motown’s Soul imprint!