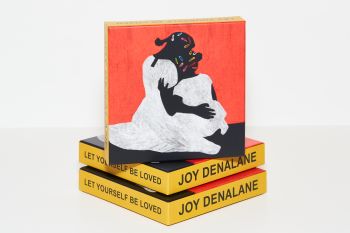 JOY DENALANE is rightly regarded as Germany’s top soul singer. She’s been around for almost two decades, recording mainly in German which probably explains why she’s maybe not better known than she should be. Her first English language studio album was 2006’s ‘Born And Raised’ and  since then  she’s released a couple more LPs – both in German, but they were impressive enough to convince Motown to sign her. Consequently Joy became one of a very select few European artists to have been signed to the iconic label and indeed Motown was  the imprint for her most recent album…. ‘Let Yourself Be Loved’. The long player was first issued in the US and Germany last summer. Sales were excellent and associated streams were well over 10 million!

For reasons never best explained ‘Let Yourself Be Loved’ has just won a full-on UK/European release. This new issue is a “De Luxe” edition, featuring five brand new songs and an exclusive lavish 7″ box set with eight vinyls. It sure looks impressive – but it’s what’s in the grooves that matters (to quote a certain Motown man!).

So, does the music on ‘Let Yourself Be Loved’ match the packaging and the hype? Well, in  a word – yes. By any standard ‘Let Yourself Be Loved’ is an impressive and varied musical feast. In many ways it reminds me of those lauded, epic Diana Ross albums of the late 70s and 80s – you know,  big, lavish affairs with huge productions, plenty of drama and usually sumptuous packaging. And for sure on this evidence, and it doesn’t seem to be a coincidence, it’s clear Joy can hold her own with La Ross – she has all the presence and vocal licks and, maybe more importantly, plenty more power – soul even. Why would Motown not sign her?

However the best tracks in this deluxe package are the ones where Joy and her producers eschew some of the drama and power  and focus on the song, it’s melody and delivery – allowing Ms D’s remarkable voice do the work. So here’s just a sample of some of the tracks that grab the attention because they do just that. ‘Love You Love’ is a catchy and sweet ear worm; ‘Give And Take’ is a simple but effective ballad; ‘Hey Dreamer’ is another sweetie with a lovely chorus hook; ‘The Ride’  is a  top modern soul groove by anyone’s standards… little wonder that this is the one that’s captured the hearts of soul tastemakers both in print and on the digital airwaves.

Elsewhere there’s plenty of big, impactful production numbers and, interestingly, going back to Motown and the Dianna Ross thing the album boasts two duets. First up there’s a meandering ‘I Believe’ featuring B J The Chicago Kid; then there’s a more attractive ‘Be Here In The Morning’ with input from C S Armstrong. Alongside  the tunes we listed in the previous paragraph this is an album highlight.

At 16 tracks, maybe ‘Let Yourself Be Loved’ is just a little too long. There’s a lot to take in but there’s plenty of sonic variety. It’s all held together by the album’s themes – different aspects of love and self-assertion and by Ms Denalane’s remarkable soul voice.