JOST NICKEL; The Check In ( Leopard) 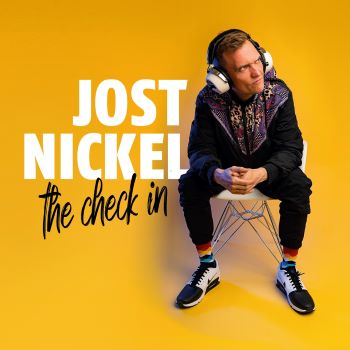 Jost Nickel is a German session drummer who’s been in the business for over 25 years. Tutored in New York, his first big gig was with jazz-grunge band Matalex. Since then, he’s played in the studio and on the road with people like US jazz stars Barry Finnerty, Randy Brecker, Jimmy Haslip and Jeff Lorber. He’s also worked with a plethora of German “names” including Germany’s top soul star Joy Denalane. He’s also collaborated with Mousse T. On top of that Herr Nickel tutors young drummers and has authored three best-selling drum primers.

The pandemic and subsequent lockdowns brought much of that work to an end, so Nickel decided to piece together his own album – his first solo set –  and ‘The Check In’ has just been released. The LP’s 8 tunes are all originals, and the musicians are chiefly German session players with whom the drummer has worked before. There are, though three US “guests” –  the previously mentioned and sometime collaborators – bassist Jimmy Haslip who features on two cuts (‘The Check In’ and ‘Transparent’), guitarist Barry Finnerty who adds a short cameo to ‘The Space’ and keyboard wiz jeff Lorber. Lorber’s keys are at the fore on the Steely Dan flavoured ‘Silk’ and alongside Haslip’s bass on ‘The Check In’ which has a flavour that’s rockier than you’d expect from smooth jazzer Lorber.

The album opener, ‘I Understand’ features rock guitar too – maybe a throwback to the leader’s jazz-grunge days? Elsewhere there’s more laid-back Steely Dan vibes on ‘Bloom’ – the track on which Nickel’s drums are most  out front… a solo, no less. He says his influence there was Steve Gadd’s work on Steely Dan’s ‘Aja’ – so a decent role model!

There’s a gentle Bob James-esque feel to ‘The Space’ while ‘Cookies’ is a slow builder. The album ends with the most complex tune, ‘No Rush’, on which the ensemble is smaller and tighter, possibly allowing for more experimentation.