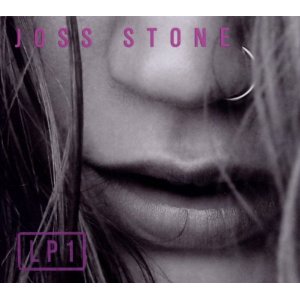 Joss Stone was the first of the new wave of British female soul singers. When she debuted 8 years ago (and remember she was just a raw-boned teenager) she was feted and praised by people like Smokey Robinson and Burt Bacharach. Since then she’s sold millions of records and diversified into other areas. She rubs shoulders with some of music’s glitterati but (especially) in her homeland she’s never really won the serious critical acclaim that people like Adele and Amy Winehouse enjoy(ed).

So it seems that here young Joss is trying to make a new start. The album’s title is a clear indication of that intent. ‘LP1’ proclaims a newness; as if the albums that came before meant little. Moreover, the set’s on her own label and she’s brought in a high-profile, “serious” producer – Dave Stewart, no less, to work with. Between them they’ve realized that Joss’s previous USP has been her unbridled soulful spontaneity, so they resolved to record the album quickly (6 days in total we’re told) and to use the best Nashville session players. Without doubt, they’ve achieved the vital spontaneity and Joss’s vocals are as raucously soulful as ever but sadly most of the songs don’t match up. Maybe Mr. Stewart just doesn’t understand the rigours of soul in the way that Ms. Stone’s early mentors did, and here he saddles her with a ponderous, country rock- tinged sound that’s more Janis Joplin than Candi Staton.

The best track on the album by a mile is the quite beautiful ‘Drive All Night’. It’s a lovely, heartfelt, smouldering ballad on which she shows that she really does know that great soul singing is as much about what’s left out as what’s put in. Here she underplays the song like a seasoned, Southern soul belle and quite puts Adele, Amy Winehouse and many more into the shade. Elsewhere though the approach is much more over the top and the effect is the lesser for that. Maybe she’s just trying to wring some real emotion from the unfocused material such as the ponderous ballads ‘Landlord’ and ‘Boat Yard’. The up-tempo cuts – like ‘Don’t Start Lying To Me’ – are too rocky to please soul connoisseurs while the attempt at funk that is ‘Karma’ proves that Dave Stewart doesn’t understand the essence of the genre.