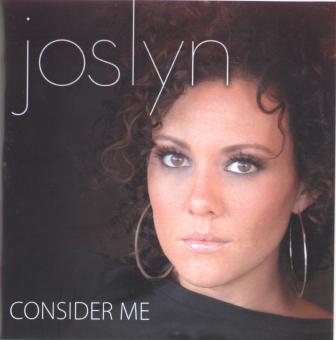 Soul collectors with reasonable memories should recall Joslyn’s 2005 eponymous album. Released on Power Music, the album was actually credited to “Joslyn and So Very” (So Very being the production duo Craig Poole and Rob Wannamaker) and on release it garnered good reviews and was generally well received by the modern soul crowd for its sophisticated take on soft soul with a smooth jazz twist. Fast forward seven years now, and the bulk of that album gets the recycle treatment by UK soul specialists Dome Records. Dome had already licensed odd tracks from the Salt Lake City based singer for a couple of their compilations and interest in those tunes has encouraged the Dome execs to offer a full album on Joslyn. This newie, ‘Consider Me’ boasts 11 tracks – of which seven were featured on that original long player. Thankfully the cuts that won the plaudits back then remain – I’m talking of the lovely, gentle modern soul groove ‘Used To’, the tight beater that is ‘So Cool’ and the innovative remake of Loose Ends’ ‘Hanging On a String’. The other songs that remain from the first album are – the bright ‘Do Watcha Gonna Do’, the Lisa Stansfield-esque ballad ‘At The Same Time’ the gentle ‘Love Surreal’ and the more experimental ‘Supernatural’.

The “new” cuts all offer the same kind of gentle soul sound. They are the ethereal summer vibe that is ‘Never Ending’, the folksy ‘Consider Me’ (almost folk/rock) and a cover of Sarah McLachlan’s ‘Circle’ – which also has a folksy, feel to it. That leaves a lovely chilled out remix of ‘Used To’. Always the big tune on the original album, this new mix throws new light onto a great little modern soul song. I’ve noticed that copies of the lady’s original album are changing hands for over £70 – a measure of that LP’s quality, for sure. Here, for a fraction of that cost, you get the bulk of that set and a quartet of real classy, new cuts. So, for Joslyn it’s not so much a question of “consider me” but “reconsider me”… worth investigating.