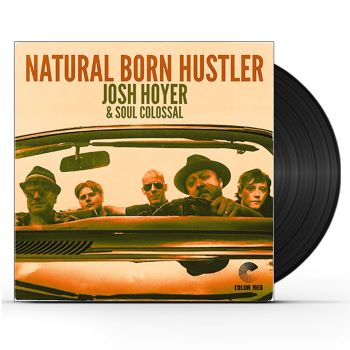 Soul Colossal hail from Lincoln, Nebraska. Fronted by the stentorian Josh Hoyer, they consist of Benjamin Kushner (guitar), Blake DeForest (trumpet), Mike Keeling (bass) and Harrison ElDorado (drums) and anyone who doubted their name (“Soul Colossal”) were put to shame when they unleased their 2018 album ‘Do It Now’. The LP proffered a big, big, organic soul sound that few believed was still being made. It was championed by old school soul connoisseurs everywhere and on the strength of its success one of their earlier efforts – the 2016 single ‘Parts Of A Man’ was reissued on 7” vinyl and immediately sold out! A little bit of digging reveals where the band found their sound. Each member of the quintet are big fans of classic soul and they honed their sound in the old fashioned, tried and tested way – out on the road. The group have played countless gigs – both on their own and in tandem with people like George Clinton, Charles Bradley, Booker T Jones, and the Muscle Shoals Revue. Little wonder that Soul Colossal craft a sound that is powerful, committed and righteously soulful. Proof positive of all that comes via their latest album ‘Natural Born Hustler’ which has just been released.

The 10 tracker begins with the brassy, shifty ‘Hustler’ and ends with a tough ‘Ring The Bells’ which will recall the likes of Bobby Bland. In between Hoyer and the team deliver all kinds of old school soul. The frantic ‘The Night’ is a nod to Northern soul while the succeeding track, ‘Take My Chances’ sounds like it could have been cut down in Memphis or Muscle Shoals. For something that swings try ‘Gimme That Lovin’’ and if you want a ballad, then ‘The Whisper’ is the nearest you’ll get, though ‘Automatic’ is almost gentle too but with Hoyer’s big delivery, “gentle” isn’t the obvious adjective.  That one, by the way, with some lovely harmonies (unexpected, almost doo-wop?) is (for this reviewer anyway) the album highlight. It’s an enduring testament to true love but other songs offer tougher messages. The funky ‘Sunday Lies’, for instance, calls out the chasm between word and action when those in power corrupt their messages. Topical or what! However, that cut despite its message, like the rest of the album, isn’t heavy or didactic; ‘Natural Born Hustler’ is just good ‘ole fashioned, organic soul from start to finish!