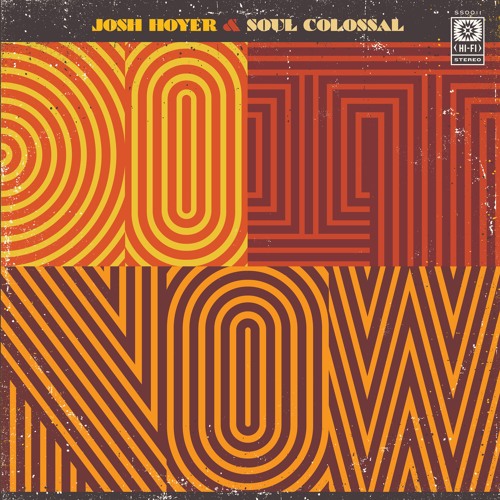 Josh Hoyer hails from Lincoln, Nebraska and in 2012 he formed the five piece band that is Soul Colossal… Benjamin Kushner (guitar), Blake DeForest (trumpet), Mike Keeling (bass), Larell Ware (drums) and Josh himself on keys and vocals. The players came together via their mutual love for classic soul and funk – specifically the sounds of Stax, Motown, Muscle Shoals, New Orleans and Philadelphia. Their uncompromising commitment to that formula has provided the band with plenty of work. Since their inception, Soul Colossal have played over 150 shows each year including opening for acts like George Clinton, Charles Bradley, Booker T Jones, and the Muscle Shoals Revue. You probably won’t be surprised to learn that their passion for the “old school” has won them plenty of fans in Europe. Indeed last year the band completed a 27 date European tour, from which a live album was well received and because of the love they’re feeling from Europe, Josh and the boys have decided to release their latest album in Europe long before a US release.

‘Do It Now’ hit the European sales racks at the end of August and the soundscape they cook up on the ten tracker really does recall proper soul’s golden age. The LP is topped and tailed by two southern style beaters – both ‘Do It Now’ and ‘The Liberator’ are brassy and brash and though recorded in Nebraska, you’d be forgiven for thinking that the provenance was Muscle Shoals. ‘The Other Side’ is another classy southern roller and if you’re in doubt that the heart of the  ‘Do It Now’ LP is in soulsville, try the searing ‘Tell Me Why’ – complete with a store front church intro, it’s a clincher.

Elsewhere ‘Love Song’ is sweet and simple and reminds me of ‘People Get Ready’; ‘Clara Jayne’ rides a steady soul groove; ‘Enough For Everybody’ is more complex, jazzy even; ‘You, I , We (All Together)’ is rough and funky while the equally tough  ‘Star Culture’ might be just a tad too rocky for some soul sensitivities. That, though, is more than made up for by one quite remarkable cut – the gorgeous ‘Better Days’. This mid-tempo groove is drenched in the most remarkable horn arrangement and soloing this side of the last Tower Of Power album. It’s fast becoming a 2018 favourite here at SOULANDJAZZANDFUNK; yes, it’s good!

And yes, lots of variety on ‘Do It Now’ but what holds it all together (apart from the band’s obvious collective passion for proper soul) is the mighty voice of Josh Hoyer – powerful, committed and righteously soulful.

The album is out now in Europe, but for some reason won’t be available in the States till January after the band have completed another European tour that takes in France, the Netherlands, Germany, Spain and Belgium. Find out more @ www.joshhoyer.com