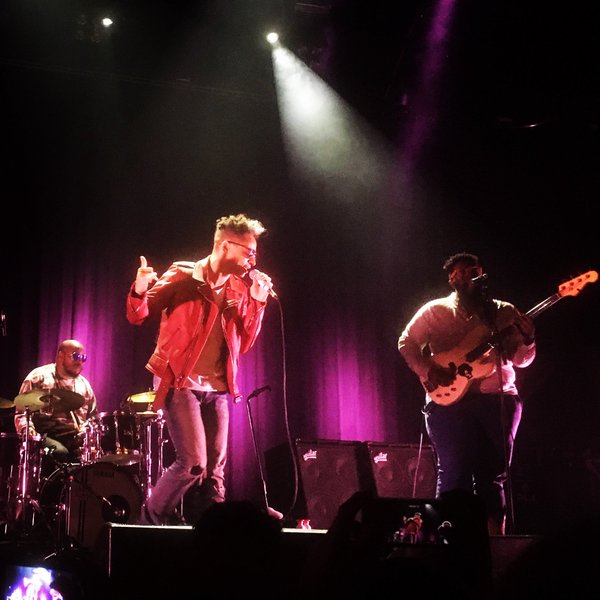 Though, by his own admission, he was feeling bleary-eyed and a tad disorientated following an early morning flight from Latvia to get him to Cheltenham on time for this lunchtime concert, José James showed few signs of travel weariness on the evidence of this performance. It was, in short, sensational. Backed by a great three-piece band –  Solomon Dorsey on bass and backing vocals, Joe ‘The Candy Man’ Blacks on drums and keyboard maestro, Takeshi Obayashi – the Minneapolis-born singer was in a super-energetic mode, serving up succulent slices of sticky soul-jazz garnished with jazz-dropping vocal pyrotechnics. Indeed, James in a live context is much more dynamic than his records, with their largely laidback ambience, would suggest.

In addition to original material – ranging from older tunes such as ‘Black Magic’ to the wistful freshly minted ballad, ‘Let It Fall,’ a taster from his forthcoming album ‘Love In A Time Of Madness’ – James served up an excellent Bill Withers medley which melded ‘Who Is He And What Is He To You’ with ‘Ain’t No Sunshine,’ and ‘Grandma’s Hands.’ It was at this point that James started a new kind of vocal improvising, delivering notes in a stuttering, repetitious, fractured way as if his voice had been sampled by a DJ who then proceeded to  do some ‘scratching’ with it. The effect was jaw-dropping, and proved what a seriously virtuoso vocalist the 38-year-old has become. After this, the singer ratcheted up the excitement further with a blistering hip-hop-influenced track dubbed ‘Police State’ – which he ironically dedicated to Republican Presidential candidates Donald Trump and Ted Cruz – where he rapped ferociously about racial injustice in America. It was a trenchant and very potent indictment of so-called ‘race relations’ in the USA. In stark contrast, James ended the show – which he jokingly described as ‘an erratic musical journey’ – on a more upbeat and harmonious note with the heart-warming ‘Do You Feel,’ a retro-styled soul ballad that channelled the old school spirit of Ray Charles and Aretha Franklin. It brought the curtain down on a transcendent performance where José James took jazz singing to a new level of artistry and creative endeavour.