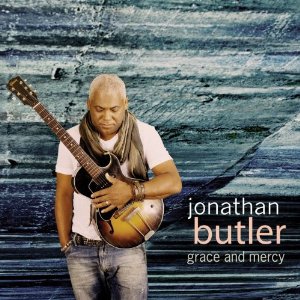 The prolific Jonathan Butler’s work has regularly been crafted around his religious beliefs. A devout, practising Christian since his late teens, he’s often used his songs to spread the message to which he himself is committed and on this new 11 tracker all the songs are based around his beliefs. He’s put the long player together to thank his God for the blessings he’s enjoyed over the last two years (new grandchildren and a wife recovering from cancer) and to offer hope to those who might be facing their own tribulations. ‘Grace And Mercy’ though isn’t what you’d call a “gospel” album – certainly sonically. The sound here is Butler’s signature blend of smooth jazz and pop/soul which allows him to showcase his guitar mastery and gentle vocal approach.

Hear that Butler sound at its best on the crisp opener ‘You’re All That I Need’. It’s a mellow mid-tempo groove that would sit nicely on any smooth jazz radio station’s playlist. ‘Don’t Walk Away’ is a tight little soul groove too and on both the messages are a little more subtle than stuff like ‘Moments Of Worship’ and ‘Give It Up To God’. Both of those are Biblically grounded but whether they achieve the emotional uplift that Butler is hoping for will clearly depend on where the listener’s coming from. ‘I Know He Cares’ is the album’s big ballad but again its appeal will be limited by its overt message.

I know modern soul fans often scan albums like this for tunes to satisfy their thirst for the rare or unusual groove (Butler’s ‘So Strong’ album was a good source for them ) but I fear they’ll leave this set disappointed. Not that Jonathan will be bothered by that. He sees this collection as part of his ministry. He’s happy to spread the word and here he does that in his unique way.