Johnny “Guitar” Watson: ‘Ain’t That A Bitch’ and ‘A Real Mutha For Ya’ (Culture Factory) 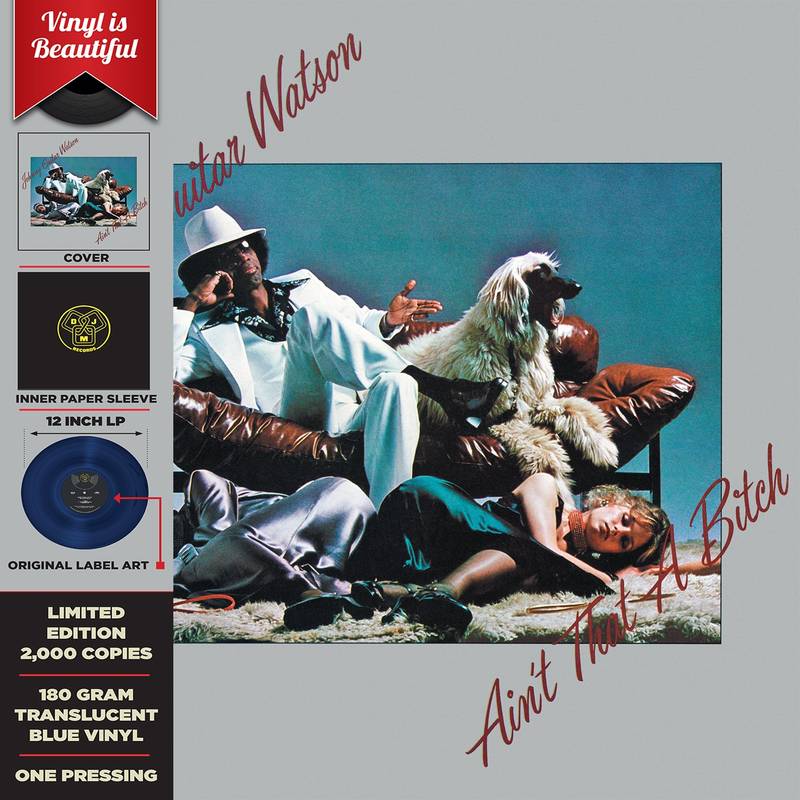 These were Houston-born Watson’s two biggest selling albums, released in 1976 and ’77 respectively for the UK-based DJM label. They contain some of Watson’s best-known tunes and have just been reissued by France’s Culture Factory label on limited edition coloured vinyl to coincide with Record Store Day.  Now available on blue vinyl, ‘Ain’t That A Bitch’ is a significant album in Watson’s canon as it heralded his transformation from a journeyman blues guitarist – whose biggest hits up to that point were scored in the mid-’50s and early-’60s – to a pimped-up blues-funk superstar. Combining a flamboyant persona with a distinctive, funked-up brand of blues and soul, Watson hit the US singles chart in 1976 with two fine 45s – the disco-tinged ‘I Need It’ and infectious, funk-infused ‘Superman Lover’ – taken from his ‘Ain’t That A Bitch’ album (the title tune is also a killer track). Watson’s charisma as well as his talent is what lights up ‘Ain’t That A Bitch.’  Not only could he play some mean, stinging blues guitar licks, but he also possessed a one-of-a-kind, super-smooth voice – and combined, those two features became an irresistible attraction in the mid-to-late-’70s. In fact, Johnny “Guitar” Watson contemporised the blues. In so doing, he attracted a new, younger, audience and made the idiom seem relevant again for a new generation of listeners.

1977’s ‘A Real Mutha For Ya’ – pressed here on yellow vinyl and which boasts an hilarious front cover – was an even bigger smash (in fact, it represented the apex of his commercial success). The classic title cut was a Top 5 US R&B hit – a humorous meditation on the vagaries of contemporary life that everyone could relate to – while the groove ballad, ‘Lover Jones,’ made the same chart’s Top 40. Other highlights include the breezy, horn-laden ‘Your Love Is My Love’ – where Watson, a year before Herbie Hancock, processes his vocals with a vocoder/vocie box effect.  ‘Tarzan,’ cast from a similar mould to ‘A Real Mutha For Ya’s’ title cut, also stands out and features some ace guitar playing. Forty years on from their original release, both these LPs continue to shine brightly as the biggest jewels in Johnny “Guitar” Watson’s crown. Both albums are pressed up in quantities of 2,000 so there’s still plenty of time to snap up a copy. Get one while you still can – you won’t be disappointed.