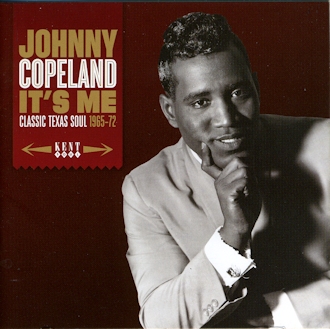 When he died some 15 years ago Johnny Copeland was considered one of the world’s leading exponents of the blues. He’d been “discovered” by the media luvvies and the chattering classes who were amazed at the honesty, toughness and spirit of the man’s music – and, of course, unlike many of his contemporaries, he’d survived. Johnny even won a Grammy… 50 years or more since he’d started in the business! Before this renaissance, Johnny Copeland was only known to blues purists and to veteran Northern soulsters who’d espoused his inflammable ‘Sufferin’ City’ back in the day. Well, with this new 2 Cd, 43 track Kent collection, everyone- media luvvies, the chattering classes, blues connoisseurs and the Northern fraternity, included – can catch up on an important chapter in Johnny’s history… that part of his story when he was a largely unsuccessful, hard-gigging, single-recording blues man working for independent producer Huey Meaux.

Meaux, “the crazy Cajun”, was a hustling music biz entrepreneur who took the Houston-based Copeland under his wing in 1964. He recorded him extensively and placed those recordings with labels like Wand, Suave, Jet Stream, Boogaloo and Wet Soul with varying degrees of success. This collection brings together all the recordings the duo made between 1965 and 1972 and also included is a rare set of simple demos of earlier Copeland material that Meaux had the singer/guitarist commit to tape, probably for copyright reasons.

Musically, it’s classic soul/blues all the way with Copeland coming across like an amalgam of Bobby Bland and Johnny Ace. Indeed Ace, appeared to have been something of a role model for the Louisiana –born artist. One of the album’s highlights is a heartfelt medley of Ace hits – ‘Anymore’, ‘Pledging My Love’ and ‘Cross My Heart’. Elsewhere there’s an equally heartfelt, song-checking tribute to Sam Cooke on which Copeland also pays tribute to Chuck Willis, Jesse Belvin, Rudy Lewis, Dinah Washington, Nat King Cole and , of course, Johnny Ace. ‘Sufferin’ City’ remains a standout and of interest too are Copeland’s idiosyncratic versions of The Everly Brothers’ ‘Wake Up Little Susie’ and Bob Dylan’s ‘Blowing In The Wind’. The album, by the way, is named for the Bruce Channel song which opens proceedings…’It’s Me’ is an easy going, brassy slab of urban blues… a perfect example of Copeland’s oeuvre.