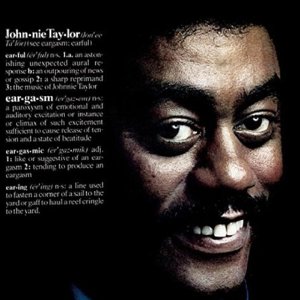 Johnnie Taylor was the archetypal Southern soul singer but strangely his biggest hit – the sinuous 1976 smash ‘Disco Lady’ wasn’t particularly “Southern”. Indeed it was recorded in Detroit and the track’s core musicians (members of George Clinton’s Parliament/Funkadelic troupe) were off the wall funskters rather than down home brothers. Equally odd, I guess, is the fact ‘Disco Lady’ isn’t, technically at least, a “disco” song. Both the artist (Taylor) and the song’s chief creator and producer (Don Davis) saw the song as more of a sensual ballad that just happened to mention “disco” in the lyrics. Complicated, isn’t it? Well, the whole story is expertly explained in this new, re-mastered reissue of Johnnie Taylor’s ‘Eargasm’ – the album that spawned the song.

‘Eargasm’ was Taylor’s debut album for CBS who’d bought up his contract after the messy demise of Stax and the CBS execs were keen for him to keep on working with Don Davis who’d been responsible for his best work for the Memphis label. Working with Harvey Scales, Al Vance, David Van Der Pitte and the aforementioned Mothership musicians they created the single ‘Disco Lady’. The song summed up the musical mood of the mid 70s and quickly dominated the US music charts –eventually becoming the first ever platinum record. Business sense demanded an album to reinforce matters and the 9 track ‘Eargasm’ was the result. Davis had been around the block enough times to know that there was no artistic mileage in trying to recreate ‘Disco Lady’ ad nauseam, so he put together a varied and, by extension, pleasing long player. The only cut (apart from THAT hit) that could be dubbed “disco” was the pacey ‘It Don’t Hurt Me Like It Used To’ though ‘Don’t Touch Her Body (If You Can’t Touch Her Mind)’ might have set some toes tapping. A tad more sophisticated maybe is the Lou Rawls flavoured ‘You’re The Best Girl In The World’ while a retread of Davis’ ‘Pick Up The Pieces’ (a song usually associated with Carla Thomas) is the LP’s outstanding ballad. Enjoy them all again on this well-timed reissue that offers the full original LP along with three “bonuses” – the single and 12″ remixes of ‘Disco Lady’ and the instrumental of ‘Somebody’s Getting It’ – the vocal cut, of course, being the follow up to ‘Disco Lady’.