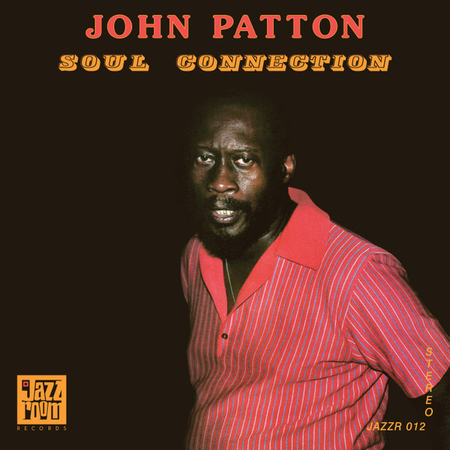 John Patton made his name at Blue Note Records in the 1960s as a star of the Hammond B3 organ; between 1963 and 1969, the Kansas City-born keyboardist cut a whopping eleven albums for Alfred Lion’s iconic jazz label, including the classic soul-jazz titles ‘Oh Baby!’ and ‘Let It Roll.’ After a fertile tenure at Blue Note – where he also appeared on albums by saxophonists  Lou Donaldson, Don Wilkerson and Harold Vick as well as guitarist Grant Green – Patton’s career noticeably waned in the 1970s as jazz-rock and fusion took the US jazz scene by storm. But after a decade-long lean spell, Patton made a comeback in 1983, recording his first long-playing record in fourteen years with ‘Soul Connection,’ originally released on drummer Alvin Queen’s Switzerland-based indie label, Nilva. Out of print for years and coveted by collectors, ‘Soul Connection’ is now reissued on vinyl by the UK’s London-based Jazz Room label, allowing a new generation to savour the keyboard skills of the man they dubbed “Big John.”

At Blue Note, Patton mainly worked within the classic organ trio format but ‘Soul Connection’ finds him working with a quintet featuring tenor saxophonist Grant Reed, trombonist Grachan Moncur III – who some will recall from his avant-garde explorations with Jackie McLean at Blue Note in the ’60s – guitarist Melvin Sparks and drummer, Alvin Queen. Recorded in New York in June 1983, the five tracks consist of two tunes each by Patton and Moncur while the opener is a sizzling soul-jazz reconfiguration of Serbian trumpeter Dusko Goykovich’s ‘Soul Connection,’ where Patton trades solos with the excellent Reed and Sparks.

The Patton-penned ‘Pinto’ is a playful uptempo tune that exudes both mischief and mirth while another of his compositions ‘Extensions,’  which swings hard, is deeper and more exploratory in nature; it contains some sterling fretboard work from Melvin Sparks followed by deft improvisations from Moncur and Reed before Patton wows the listener with some sparkling organ pyrotechnics.

On the album’s second side, ‘Space Station’ is an easy-flowing swinger propelled by Patton’s pedalled bassline and Queen’s shimmering ride cymbals. Over the top,  Sparks plays Wes Montgomery-like guitar octaves while Reed and Moncur blow some engaging solos.

‘Soul Connection’s’ finale, ‘The Coaster,’ is an open-ended modal-style groove with a brisk, walking bass line that runs to an epic 12 minutes and allows the musicians to shine both individually and collectively. It closes what is an enjoyable cache of soul-jazz but which didn’t find much of an appreciative audience back in 1983 when jazz’s stock was low.

After ‘Soul Connection,’ Patton didn’t record another solo album for ten years but in 1996, he enjoyed something of a career renaissance thanks to the UK’s acid jazz scene, which feted him as a hero and kept him busy with work until his death at 66 in 2002.

Hard to find in its original form, ‘Soul Connection’ now makes a welcome return. After years of unjust neglect, this excellent album, which shows that John Patton was still at the top of his game in the ’80s, deserves to find a wider audience.