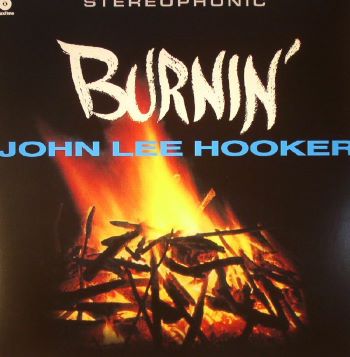 Mississippi born blues man JOHN LEE HOOKER was a one off!. His take on the electric blues was unique. He had a vocal and guitar style all his own – full of menace, intrigue, tension  and latent sexuality. You can hear those musical qualities at their most potent on his 1962 Vee Jay album, ‘Burnin’. The set has long been out of print, but Craft Recordings are set to reissue it in an expanded version, they say, to celebrate, the 60th anniversary of its original release. If my maths are right,  then it’s actually, the 61st anniversary – but that’s semantics. What matters is the music and here, on ‘Burnin’ we have a career-defining, classic electric blues album  that influenced plenty of bands back in the day (think the Animals and the Yardbirds) and still sounds vital today.

The LP kicks off with one of John Lee’s best known tunes, the magnificently threatening ‘Boom Boom’, now a staple of blues anthologies and rightly so! Amongst other highlights is the foreboding ‘Thelma’ on  which Hooker assures his cheating lover that he forgives her. However, the  frenzied vocals suggest another story. Then there’s the talking blues of the down and dirty ‘Drug Store Woman’ – Hooker’s southern drawl becoming one of his signature sounds. ‘Blues Before Sunrise’ is more of a classic blues, while ‘Let’s Make It’ is surprisingly jaunty for John Lee Hooker. It’s amazing what a genius  guitar player can do with just one chord! For something a little different try ‘Keep Your Hands To Yourself’ which is a hybrid of The Champs’ ‘Tequila’ and Bo Diddley flavours. A superficially happy sound, but the menace is in the vocal. And therein is one of the secrets of Hooker’s oeuvre. He takes a simple vehicle (12 bar blues) and creates something complex  and multi layered via his boogie guitar style and drawling vocals. Like we said, the man  was unique!

Now before soul fans switch off  we need to tell you that the musicians on the album are soul legends. Hooker was a long-time pal of Motown sessioneer Joe Hunter and Hunter got other member of the Snakepit’s Funk Brothers to get over to the Vee Jay studios to help out. So here the players number keyboardist Joe Hunter, bassist James Jamerson, guitarist Larry Veeder, and drummer Benny Benjamin. There’s also a  horn section, featuring saxophonist Hank Crosby and baritone saxophonist Andrew “Mike” Terry who give additional textures to the songs. So yes, between them Hooker and the Motown crew craft something a little different – again “unique”.

This upcoming Craft reissue offers the original album alongside newly discovered mono mixes and a alternate take of ’Thelma’. The album will be available in several formats. A 180-gram vinyl LP features a stereo mix of the album, as it was first released in 1962, while a tip-on jacket, which replicates Vee-Jay Records’ original designs, rounds out the package. In addition to a wide release on classic black vinyl, fans can also find the album in a variety of limited edition colour pressings,. The expanded CD and digital editions offer both mono and stereo mixes of the album.