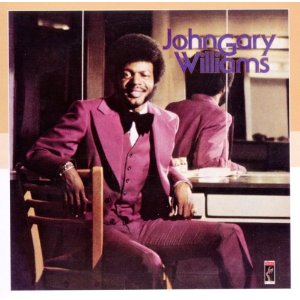 John Gary Williams was signed to Stax Records in 1964. Back then, though, he was part of the hugely underrated Mad Lads. He stayed with the group till 1972 when he was signed to the label as a solo artist and set about recording this eponymous album. Sadly for him its release coincided with the label’s death throes and despite being released twice it did nothing. Thankfully, the Ace imprint BGP have dug it out, dusted it down and now offer it for the first time on CD … and what a great early 70s set it is!

The eight track album (yep, that’s what you got in those days!) was a neat mix of four covers and four originals. The covered songs are the 4 Tops’ ‘Ask The Lonely’, Bobby Goldsboro’s ‘Honey’, The Spinners’ ‘How Could I Let You Get Away’ and ‘Open Your Heart’ – originally recorded by the Newcomers, though Williams had written it. Of those the take on the Tops’ classic is outstanding. Always a great song, Williams reorganizes it in the way that Isaac Hayes had done with so many familiar tunes… not surprising, that, ‘cos most of the musicians here were from the Hayes’ band. The other three are equally lush and perfectly suited to Williams’ falsetto. Of the original songs, the best known is the in-demand, sedate dancer ‘The Whole Damn World Is Going Crazy’ which despite its seeming lightness boasts a serious lyric. The other three – ‘I See Hope’, ‘I’m So Glad Fools Fall In Love’ and ‘Loving You (It Ain’t Easy)’ are all excellent examples of 70s soul too.

This BGP reissue boasts two “extra” tracks – ‘Come What May’ and ‘Just Ain’t No Love Without You Here’. The easy going songs (with a flavour of J. R. Bailey about them) formed both sides of a ’74 single on the Stax subsidiary, Truth… but like the album the single disappeared. Williams, by the way, is still working. He tours with an incarnation of the Mad Lads, but this lovely album shows just what might have been.