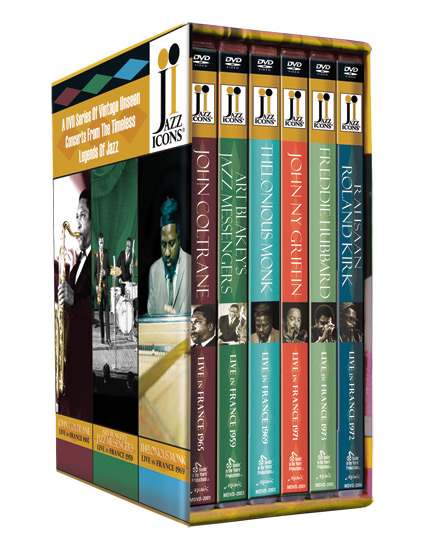 If you’re a jazz fan, what can be better than hearing John Coltrane perform ‘A Love Supreme’ live? Well, actually, seeing him perform it too. If you buy this amazing box set, you’ll be able to see rare footage of the legendary Coltrane quartet – with McCoy Tyner on piano, Jimmy Garrison on bass and drummer, Elvin Jones – deliver a sensational 52-minute set that includes the whole of ‘A Love Supreme’s’ first part (titled ‘Acknowledgement’) and half of ‘Resolution’ (the second part of ‘A Love Supreme’). Coltrane actually performed all four parts of ‘A Love Supreme’ at the Antibes Jazz Festival back in 1965 and it was captured on film but sadly, two-thirds of the footage had deteriorated beyond repair. Even so, just seeing and hearing Coltrane’s quartet perform part of that monumental work is an edifying treat for diehard jazz heads. The band’s set also includes ‘Naima,’ ‘Ascension,’ and ‘Impressions’ – classics all – and the intensity of the performances will bring out most jazz aficionados in spine-tingling goose bumps. In addition to the music, Ashley Kahn’s eloquent liner notes put Coltrane’s quartet in its rightful historical, cultural and musical context.

Also captured live in France – but at an earlier juncture, in Paris in late 1959 – are Art Blakey’s Jazz Messengers. This particular incarnation of drummer Blakey’s hard bop academy includes new recruits saxophonist Wayne Shorter and pianist Walter Davis Jr while the repertoire comprises the bebop classic, ‘Bouncing With Bud,’ and the ace Benny Golson originals, ‘Along Came Betty’ and ‘Blues March.’ The televised concert climaxes with an incendiary ‘A Night In Tunisia’ and also includes a bonus interview with the band.

Idiosyncratic pianist, Thelonious Monk, performed in Paris ten years later for a solo piano concert, which was televised by French TV at the time. Shot in colour, it shows Monk performing some of his classic songs – ‘Epistrophy,’ ‘Round Midnight,’ and ‘Crepuscule With Nellie’ – and also features rare footage intended for an aborted French documentary on the pianist/composer. There’s also an on-camera interview with Monk but it’s excruciating to watch as the pianist’s unease – due to the questioning by his French ‘interrogator’ – is palpable. It’s deeply fascinating nevertheless.

Tenor saxophone titan, the late Johnny Griffin, was no stranger to Europe either (in fact he lived for many years in France, passing away there in 2008). In August ’71, he appeared at a French jazz festival at Chateauvalion and it’s the footage from that gig that comprises ‘Live In France 1971.’ The diminutive Griffin – dubbed the ‘Little Giant’ – is in explosive form, leading a quartet that includes Art Taylor on drums and is augmented by a sizzling cameo from the great puff-cheeked wind machine, Dizzy Gillespie. Listen out for a phenomenal rendering of ‘A Night In Tunisia.’

More jaw-dropping jazz pyrotechnics come from the horn of the late great Freddie Hubbard, caught in action in France in 1973. Leading a quintet that includes former Horace Silver sideman, Junior Cook, on sax, and George Cables on electric piano, ‘The Hub’ is captured at the peak of his powers during his tenure with CTI Records. The 50-minute set includes just three cuts – ‘Straight Life,’ ‘The Intrepid Fox’ and ‘First Light,’ all taken from the trumpeter’s CTI repertoire – but their elongated format offers the viewer a chance to gauge and appreciate the astonishing trumpet technique of Hubbard as well as demonstrate the collective talent of his band. Great stuff.

The last DVD in the box set is colour footage that chronicles a 1972 French excursion for Rahsaan Roland Kirk, the man who had so many different (and sometimes weird-looking) instruments dangling from his neck and shoulders that producer Joel Dorn once described him as resembling “a Christmas tree from Pluto.” Kirk’s party piece was playing three wind instruments at once but it was no meretricious sideshow gimmick – though visually arresting, it was a genuine attempt to make interesting music and create new sounds and textures. Yes, the eye-grabbing visuals certainly added to Kirk’s allure but as this DVD vividly demonstrates, it’s his music – bold and original and which digs deep into the jazz tradition while continuing to look forward – that matters most. Kirk’s repertoire ranges from Basie’s ‘Lester Leaps In’ to Stevie Wonder’s ‘My Cherie Amour’ and climaxes with an incendiary rendition of his classic signature piece, ‘The Inflated Tear.’

Every DVD comes in a tasteful package that includes a thick booklet packed with authoritative liner notes and plenty of archive pictures. All in all, then, this is a five-star audio-visual feast for jazz fans. Get the box set at: www.jazzicons.com or www.mosaicrecords.com