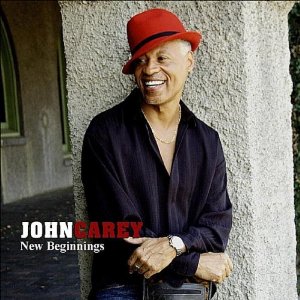 Chicago guitarist John Carey’s been making music since the 70s and ‘New Beginnings’ is his fifth solo album. Musically his style has elements of the sound and approach of George Benson, Norman Brown and the late Zachary Breaux. This is where, maybe, the soul crowd might get ready to bail out – not another jazz guitar album, they’ll say! Well how wrong they’d be for not persevering ‘cos the 11 tracker boasts some of the best modern soul vocal grooves of the year so far.

Those vocals come from John’s wife, Gina (who has her own album out too, by the way) and between them Mr and Mrs C craft a delicious blend of soul that, I’m sure, is born out of their relationship. The two big tunes that will leap out and grab the modern soulsters are ‘Step Show’ and ‘Groove To This’. The former is, as you might have guessed, a steppers’ tune and it’s a real delight with a hint of Mark Johnson’s fondly-remembered ‘Daydream’ about it. It’s irresistible as is the faster ‘Groove To This’… this one comes complete with all those magic ingredients that make a modern soul anthem. The tighter ‘Say Yes’ is a goodie too while the cha-cha/rumba rhythms of ‘Dancin’ On A Rainbow’ will recall the best vocal cuts on the last two Santana albums.

Of the instrumentals, the opener, ‘Strut Yo Stuff’ is particularly strong with a great sax break from Dave Thomasson while ‘Down In Nassau’ is possibly the most laid-back, gentle summer groove of the season. Personally, I’d skip on John’s rocky paean to his missus, ‘A Song For Gina’… but I do know people who get off on Ernie Isley style pyrotechnics. That said, this a really good contemporary set that sits beautifully on the sweet cusp of modern soul and smooth jazz. John Carey’s ‘New Beginnings’ is currently being promoted by www.soulchoonz.com