JOHN ARAM: You And I (www.johnaram.com) 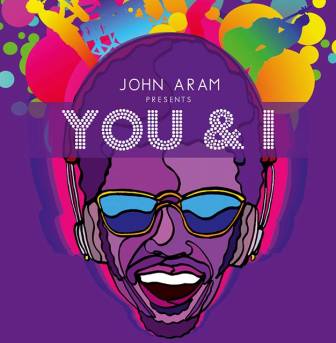 Trombonist John Aram isn’t quite a household name in the jazz, funk and soul worlds but he boasts an impressive CV and an extensive musical network. Jazz-wise he’s worked with people like Tom Garland and Kenny Wheeler while his soul credentials include working live with the Funk Brothers band. He’s also worked extensively with Phil Collins and played on his 2010 soul album, ‘Going Back’. Currently John is Musical Director at the International School of Geneva, where he now lives, and also regularly conducts the Swiss Jazz Orchestra.

Aram’s latest album’ You And I’ mixes his jazz and funk experiences to create a varied soul 7 tracker that’s topped and tailed by two mixes of the first single ‘EDT (Envie De Toi)’. In its original mix the tune’s a funky soul groove featuring a choppy Rhodes solo from Jason Rebello. Great vocals too courtesy of Sumudu and Terron Brooks. The remix cranks up the pace and offers a quirky but insistent electro figure throughout. Soul folk will prefer the original, I’m sure. They’ll also love ‘Stronger’ (if they can get past the cheesy spoken intro) and the harmonic ‘In The Air’. That’s one of the more interesting cuts on the album. It was written by Aram after his wife had been diagnosed with breast cancer. It features a heartfelt vocal from Amy Keys and a sympathetic rap from American, Rootwords. There’s also a lovely respectful version of Stevie Wonder’s ‘You And I’ ( the LP’s title cut, of course)– Sumudu on vocal again. (Stevie’s a big influence on Aram, as we’ll see)

The original album was just a six tracker – seven if you count the remix of ‘EDT’ so to make it a more complete set Aram and his band have added 4 bonus tracks. These were recorded in some touring down time (a London gig was actually cancelled) and they are essentially jazz versions of Stevie Wonder (or Wonder-inspired tunes). Most interesting is an electro, spacey version of ‘Superwoman’ though a choppy take of ‘Too High’ is worth investigating too while surely no one ever tires of hearing ‘Overjoyed’ – by whoever. Aram does a great job on this one too.