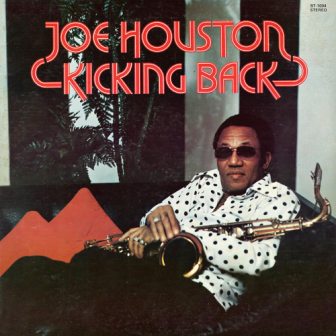 Crate diggers revel in musical rarity and great unknowns and over the last 18 months or so, many diggers have been looking for music by veteran sax man Joe Houston. His music is now ultra rare and for most of a lengthy career he was a “great unknown”.

Houston was born in Austin, Texas in 1927 and in his mid teens he was the sax player in King Kolax’s band. He then became the archetypal itinerant jazz player but by the 50s he was settled in Baton Rouge and began to cut records under his own name. In 1951 one of his tunes, ‘Blow Joe Blow’ – a raucous, rocking, “blowing” sax tune was licensed for national release by Joe Bihari’s Modern Records. It saw some action and Houston moved to LA and recorded more tunes for Modern. He enjoyed his biggest hit in 1954 with ‘All Night Long’ and he continued to record through the 60s and 70s, though major success eluded him.

To satisfy the aforementioned crate diggers, Joe’s 1978 Big Town album ‘Kicking Back’ has just won reissue by Ace’s BGP imprint. The music on the 8 tracker isn’t that far removed from the big, honking tunes with which he broke through in the 50s. Maybe it’s a tad more polished and refined but it’s still rough and rustic… a mix of soul, jazz, blues and down-home funk. To contextualise it perhaps you should think King Curtis collaborating with Willie Mitchell on a blaxploitation movie. Everything rolls along with a real commitment and passion… qualities sadly missing in much contemporary instrumental music.