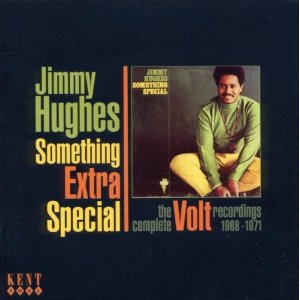 This is the third and final part of Kent’s look at the career of Alabama’s Jimmy Hughes. Kent’s first two Hughes albums covered his time with the legendary Fame label. This one looks at his stay with an equally iconic label – the Stax subsidiary, Volt. Jimmy joined Stax/Volt in 1968 where the label execs saw him as a possible replacement for the late Otis Redding. Equally, they believed that an artist of his stature would bolster the company’s re-launch after some bad business decisions had left their catalogue depleted. Sadly it didn’t work out the way the suits or Hughes had planned. The ‘Neighbour, Neighbour’ man released one Volt album and a slew of singles, but despite their quality they failed to achieve any kind of commercial success and after 3 years there was a mutual falling out and a disillusioned Hughes quit the music biz for good! Here the Kent people have assembled everything that Jimmy recorded at Volt – that’s to say, all his singles, the ‘Something Special’ LP AND an incredible 14 sides that have lain in the Stax vault – unreleased – for nearly 40 years! The 11 tracks of the ‘Something Special’ album take up the first part of the CD and they include all eight sides of Jimmy’s first four Volt singles. Southern soul collectors will be familiar with the plaintive beauty of stuff like ‘I Like Everything About You’ and ‘Chains Of Love’ (originally recorded by J J Barnes) but they may not be too au fait with great album only cuts like a version of Jimmy Holiday’s ‘It’s All Up To You’. The two sides of a fifth Volt single ‘(Just Ain’t as Strong As I Used To Be) You Done Fed Me Something’ and ‘Did You Forget’ are sequenced before the unreleased cuts. Listen hard to those and you’ll hear the subtle differences between recordings made at different Memphis studios – Stax, Royal and Sun. Its two Sun cuts steal the honours for me. First, a beautiful ballad ‘I Was Closest At Hand’; then a rolling Tyrone Davis style tune – ‘No Easy Way’. Both indicate the prodigious soul talent that was – indeed is – Jimmy Hughes. Sadly no one can tempt him to make a comeback…. even this album’s compiler, Tony Rounce, couldn’t persuade him to be interviewed. Maybe Jimmy’s content to let his superb music do the talking…. he’d have a point!