JESSE JAMES: Get In Touch With Me (Gunsmoke) 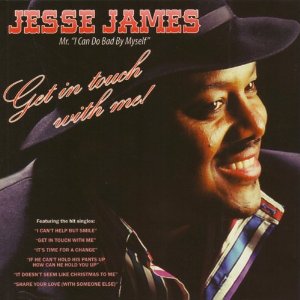 This pleasing old school soul album sneaked out last year, but on the back of James’ sell out Soul Junction vinyl single ‘I Feel You Love Changing’, it’s now enjoying a new lease of life and deservedly so – ‘cos, like I just said, it’s a no-nonsense, gimmick free proper old soul album. That’s hardly surprising, of course, since the singer’s been working steadily for almost 50 years. Born in Arkansas as James McClelland, the stage name came from an MC who couldn’t pronounce the given name and it’s stuck ever since. Long in the tooth soul fans might remember Jesse’s biggest success – 1975’s ‘If You Want A Love Affair’, and it was around that time that he cut the aforementioned ‘I Feel Your Love Changing’.

Obviously that one’s not on this set but the B-side of that 7″ is… almost. I say “almost’ because the Soul Junction version of ‘It’s Time For A Change’ is an edited version of this album’s two takes. The song’s theme is based around Obama’s election campaign and his insistence that change was due. The LP versions feature snippets from several of Obama’s and, I think, Martin Luther King’s speeches. It’s a solid enough song – but not the best. That accolade goes to the title cut – a sweet and simple mid-tempo floater that harks back to a different era. The tune is a delight and the world-weary vocal (hints of the gruffness of Womack and Bland intermingled with the honey of Frankie Beverley) is superb. The Bobby Bland connection is strongest on ‘Share Your Love (With Someone Else)’ while elsewhere there’s plenty of rustic booty shakers, social commentaries and even a Christmas song – ‘It Doesn’t Seem Like Christmas To Me’ (similar in some ways to Lonnie Hill’s ‘Cold Christmas In the Ghetto’).

The LP also boasts the best song title in recent years – ‘If He Can’t Hold His Pants Up How Can He Hold You Up’? Superficially it seems flippant – poking fun at the sartorial inelegance of adolescent boys who wear their jeans slung low. However, Jesse preaches a serious message about respecting women and treating fatherhood with proper respect, “anyone can be a baby’s dad but only a real man can be a father”… a great way of getting a message over, but because of the old school structure of the album maybe he’s preaching to the wrong audience.