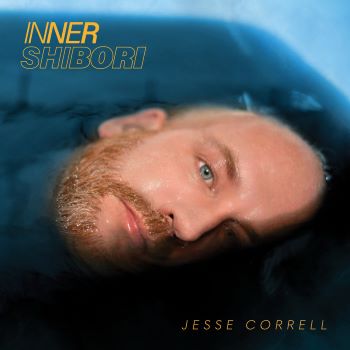 Over the past few  years we’ve enjoyed the emergence of a number of American singer/songwriters who cleverly meld elements of country, Americana, jazz and soul into a soothing aural cocktail. Add to that soundscape mature lyrics that regularly question various status quos and you have some proper adult music – a music suited to the complex nuances of the 21st century. So, we’re thinking of people like Isaac Aragon, Jacob Collier and Gideon King. Now we can factor in Nashville-based musician Jesse Correll but we need to know that Jesse’s been around long before the emergence of the sound we’ve just described. We believe he’s been in the business since the 1990s but this year he’s  making a comeback of sorts after a 15 year break. His return comes via a fourth album for him … the seemingly oddly titled ‘Inner Shibori’

Our research reveals that “Shibori” is a Japanese resist-dyeing technique where cloth is stitched, compressed, or folded before it’s immersed in dye. When the cloth is unbound, the design is unique and beautiful. Jesse says he was inspired by that idea when he created this album, seeing it as a metaphor for his life to this point – more specifically the break-up of a seven year relationship. Explaining the album title he says: “My life journey became an inner Shibori experience. It was like a breakup with my former self. I had been running from old stuff—like early abandonment—and I needed to address them to move on. There is definitely a story of the greatest love ever followed by the worst pain ever.”

With that sort of musical motivation you can probably guess that the 13 track ‘Inner Shibori’ offers plenty of introspection, often draped in 60s flavours – hints of psychedelia, hippiedom even! Indeed, the album’s first single reflected that.  ‘An Icy Cold’ was/is as chilly as the title suggests. The tune has/had a bleak, ethereal quality with a 60s feel. The psychedelia Is more obvious on the lengthy closing track, ‘Worst Of Both Worlds’  and the Haight Ashbury flavoured ‘Fetch The Water’ and ‘Hope Like Adrenaline’. Then there’s ‘Life’ which sounds as if John Lennon’s ‘Imagine’ might have been the template.

What then might interest readers of a web site devoted to soul, jazz and funk? Well ‘Inner Shibori’ does offer a number of gems that we could easily file under “blue eyed soul”. The opener, ‘Go Deeper’ is a good example – sweet, gentle, harmonic and melodic. ‘Begin Again, Again’ is flecked with blue eyed soul too while ‘I’ll Just Keep Tryin’’ is the album’s best ballad – it’s built from many ingredients but there is a soul undertow to proceedings.

JESSE CORRELL: ‘Inner Shibori’ will be available from February 11th.