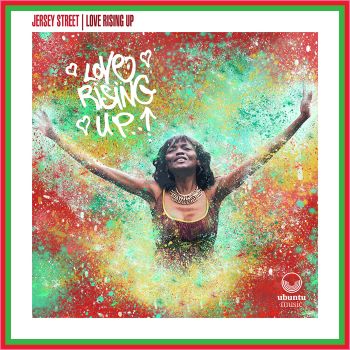 Jersey Street is a nine-piece collective based in Manchester. They’ve been around for quite some time. I think it was the late 90s when we first heard ‘em. Then they were peddling their take on house music and since then they’ve evolved to the point where they now offer a sort of Incognito/Brand New Heavies take on Brit soul…but not quite! Over time too the line up has changed.  Right now, the collective is centred around original member and vocalist Dawn Zee (sometime member of New Order) and multi-instrumentalists and producers Neil Reed and Matt Steele. Helping out on ‘Love Rising Up’ are, amongst others, drummer Steve Washington, trumpeters Dan Carpenter and Graeme Flowers and, on a trio of cuts, a sweet string section. A goodly number of the team have played with leading UK artists over a number of years. Indeed, Steele was with the Brand-New Heavies for 17 years – which might help explain a part of Jersey Street’s sound. They are, though, much more than BNH clones. You can also hear flavours of Incognito, and the ground-breaking Brit soul work of people like Amy Winehouse and Corrine Bailey Rae.  Those of you with longer memories might hear the influence of Rotary Connection on the current Jersey Street sound. The band, though, take all that in give it a thorough mix and come up with their own sound… the Jersey Street sound.

Hear that special sound at its best of the tunes that top and tail the collection…. ‘Love Rising Up’ and ‘Love Will Be Our Guide’. Both are pretty lengthy workouts (5.47 and 6.37 respectively)  with mood and emphasis changes … cerebral foot tappers in fact! In between there’s plenty more intrigue especially in the middle sombre section… ‘Carnival’, ‘Nightingale ’and ’Open You Mind’.

What’s good to see is that this album is already scaling the official UK soul chart. Great to know that the Brit soul crowd are still keen to enjoy and explore a kind of soul that’s not simply a re-tread of fuel for the feet, though there is plenty of fuel for the feet here; there’s also an awful lot more though.