JEREMY PLATT; (Something About) Blue Skies (Without Understanding) 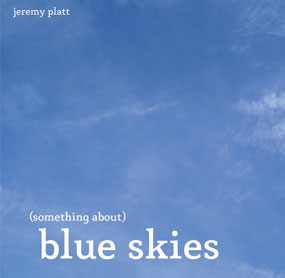 I don’t know too much about Jeremy Platt. His website reveals next to nothing save that he’s a UK- based singer/songwriter and multi-instrumentalist who’s been on the scene for a while playing sessions and gigs across all kinds of genres. ‘(Something About) Blue Skies’ is his debut album and, again, the sleeve notes don’t give away too much except that the issue date is given as 2008. My educated guess is that the album is being re-promoted on the back of the single ‘Hungry’ – a very catchy soul throwback that’s winning an internet following as well as being championed by BBC Radio 6’s Craig Charles. It’s easy to hear why the Coronation Street cabbie turned DJ has taken the song to heart. It’s an honest, organic little thing that’s totally modern but with its roots in classic 60s soul… dig those infectious “shoobie doos”! Vocally, Jeremy’s appealing, fractured falsetto will recall Robin Thicke, though Platt’s music lacks the gloss and polish of Thicke… sonically, think more of Mayer Hawthorne.

The good news is that ‘Hungry’ isn’t the only goodie on the LP. The album’s title track is another real charmer… hypnotic, mesmeric and haunting- a real ear worm. ‘At Another Time (In Another Place)’ is faster and might interest experimental Northern soulsters (if indeed such a creature exists). ‘Set Me Free’ is another sweetie – with a haunting organ sound that might remind some of Timmy Thomas’s hits. ‘Proximity’ is different again. Sparse and funky it features some biting blues guitar. Indeed Platt’s guitar playing is a key feature throughout – outstanding on the album’s closer, the quiet ballad that is ‘With You (I Could Forget Myself)’. In truth the album’s other ballads (‘Unbearable’, ‘Happiness’) lack focus and tend to meander. That said, for those jaded with formulaic soul – be it glossy retro pastiches or over-produced and airbrushed affairs – Jeremy Platt’s album will make a refreshing difference.