JEFFREY OSBORNE; Worth It All (Artistry) 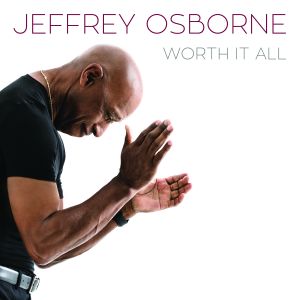 Dear old Jeffrey Osborne is a proper old school soul veteran and latterly, sadly, his recordings are few and far between. I think his last release was maybe five years ago – ‘A Time For Love’. However, out of the blue – it seems Jeff is all set to drop a new album – the 12 tracker that is ‘Worth It All’ but, sadly, sneak previews reveal that maybe it wasn’t really worth it – well not entirely.

The problem – as I see it – is that there is too much here that is formulaic and pedestrian. The soundscape here alternates between polite beaters and twee ballads and it’s those beaters that really disappoint. Jeffrey is 70 and he won’t mind admitting that he’s been around the block a few times, so maybe he could have come up with better lyrics than “Get out on the floor baby” (‘Just Can’t Stand It’) or “I want your sexy body close” (‘I Want You’) or –even worse – “I like the way you work it. I wanna say you’re so perfect” (‘Work It’). OK, this is soul and R&B, and we don’t expect metaphysical poetry, but c’mon Jeff – you’re better than this.

The album’s ballads work better but they’re still heavily clichéd and there’s no ‘Love Ballad’ or ‘On The Wings Of Live’ here. Best efforts are ‘Greatest Night’ – a chronicle of an evolving relationship (but what about “It was the 23rd June…a freaky full moon”?) and ‘Saving My Love’ which proves what Jeffrey can do when he really tries – a simple, uncluttered song on which that remarkable voice carries the day.

‘Worth It All’ boasts guest appearances from Rick Braun, Gerald Albright, rapper Kid Capri and Jeff’s son Jeffrey Junior but they can’t lift the album out of the mediocre category. The set is self produced and sure, Jeff knows what he’s about but maybe a third ear might have made ‘Worth It All’ worth a little more.