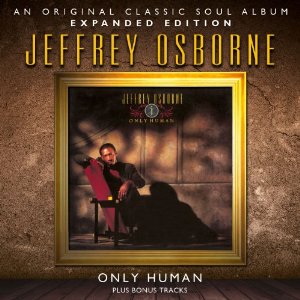 Rhode Island’s Jeffrey Osborne is a unique soul stylist but sadly he’s not that well known outside the small coterie of serious soul collectors. They’ll know that he began his music career as a drummer who got a break with a band called Love Men Ltd. In ’73 the band were signed to A&M and changed their name to LTD (Love, Togetherness, Devotion) with, by this time, Jeffrey handling lead vocals. His is the distinctive voice on the wonderful ‘Love Ballad’ and clearly he was the group’s main attraction and A&M consistently wooed him with solo contracts. It wasn’t till 1981 that he managed to break away and the hits started to flow – most notably ‘On The Wings Of Love’ –still a hugely popular “wedding song”. In 1990 Osborne moved to Arista records where he cut just one album…. the subject of this review, just reissued, for the first time, by David Nathan’s soulmusic.com label.

Helmed by the then hot Barry Eastmond, ‘Only Human’ is a great example of late 80s/early 90s soft soul. Probably prodded by label boss, Clive Davis – hoping to create another ‘Love Ballad’ or ‘On The Wings Of Love’, Eastmond and Osborne worked on a number of big, sentimental ballads like ‘The Morning After I Made Love To You’, ‘Getting Better All The Time’, ‘Lay Your Head’, ‘Sending You A Love Song’ and the gentle album title cut. In case the original ballads failed to make impact they covered their backs with a version of ‘Feel Like Making Love’ – but strangely they put the delicate Eugene McDaniel’s song into a New Jack Swing setting and it doesn’t quite work. ‘Good Things Come To Those Who Wait’ offers more of the same flavour while the set’s out and out dancer is ‘If My Brother’s In Trouble’ for which Shep Pettitbone was brought in to produce… but despite his presence the track doesn’t ignite and that’s the problem with the album. It lacks one big, big tune and that’s the way the public viewed it 1990. It had little or no impact and despite Davis’ original interest in the singer he was quickly dropped by Arista.

Maybe ‘Only Human’ isn’t the best album to spread the word about Jeffrey Osborne… but soul archivists will be delighted to have it back in circulation and as with all soulmusic.com reissues it comes with a number of bonus cuts… here it’s three remixes of ‘If My Brother’s In Trouble’ a remix of the title cut and a non-album B-side, ‘Never’.