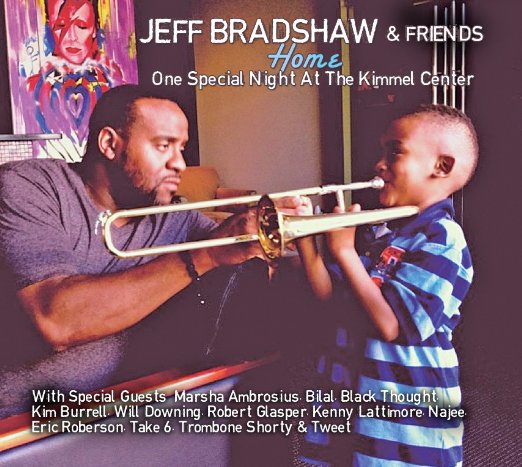 Last May Philadelphia’s superstar trombonist, Jeff Bradshaw assembled a stellar cast of singers and musicians for a concert at the Kimmel Centre – Philly’s iconic arts venue. The aim of the show was to replicate the atmosphere and excitement of the classic soul revues that criss-crossed the States in the 60s and 70s and with people like Marsha Ambrosius, Bilal, Will Downing, Trombone Shorty, Kim Burrell, Take 6, Eric Roberson and Robert Glasper on board the Philly cast list was as replete with big names as all those “back in the day” soul shows. You can judge whether Bradshaw and company captured that special magical feel via this live album which chronicles the evening.

The set’s a 14 tracker – lasting and hour and twenty minutes (I’m guessing the actual show was longer) and the cut that’s currently garnering all the attention is one that wasn’t recorded on the night. Confused? Well one of the key songs on the night back in May was ‘All Time Love’ which featured vocals from Eric Roberson and Tweet and some typically off the wall Robert Glasper piano. Bradshaw and his team always knew the song had potential as a modern soul dancer and so had the same musicians re-record it in the studio. Bradshaw’s hunch was right. That studio recording is already a big tune on the scene and rightly so. It’s built around some lusciously tight beats and Roberson’s and Tweet’s voices blend beautifully. Already enjoying heavy radio rotation and featuring on most credible soul charts, ‘All Time Love’ will be one of THE tunes of 2015. The studio recording ends the album and you can, of course, compare it with the original live version. That live one is some two minute longer and muddied to some extent by shout outs and atmospherics which after a couple of hearings become wearying. Bradshaw was right to clean it up in the studio; he’s got a hit on his hands!

OK what else is worthwhile amongst the live tracks? Well, in short, an awful lot. For starters there’s an incendiary 9 minute ‘Love’ from Gospel diva Kim Burrell; then there’s a couple of gentler tunes from Take 6 including a version of DeBarge’s ‘All This Love’; fans of Will Downing will love his ‘My Forever’; and if you dig jazz jams there’s trombone duel between Bradshaw and Trombone Shorty while smooth sax star joins Jeff for the concert closer – a version of ‘The World Is A Ghetto’.

There’s lots more besides but that wonderful studio version of ‘All Time Love’ will be this LP’s big selling point.