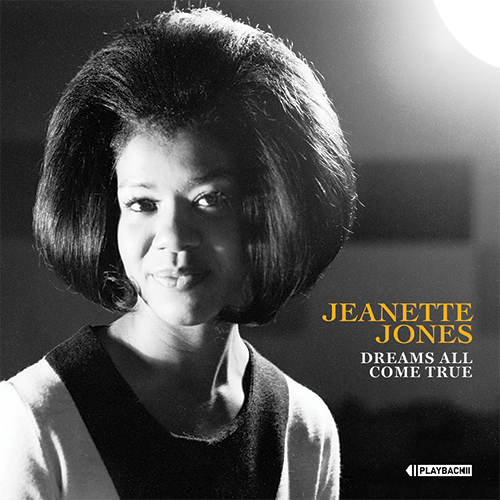 Jeanette Jones is one of soul’s great enigmas. She’s revered by a coterie of deep soul buffs even though little is known about her (no one’s even sure if she’s still alive). Equally she was never prolific as a recording artist. There are maybe a dozen tracks credited directly to her though she also fronted several gospel ensembles who made records… and right away that word “gospel” should tell you why those who’ve heard her revere her. Yes when it came to church-reared, committed testifying Ms Jones had it all.

Anyway, here’s what we know about her. Young Jeanette Jones, it seems, was “discovered” by Leo Kulka- owner of San Francisco’s Golden State Recorders. She was the lead voice in the 60 strong Voices Of Victory gospel choir and in 1965 the choir hired Kulka’s studio to make some recordings to sell at their concerts and services. Kulka was immediately impressed by Ms Jones and he tried to get her signature on a solo contract. At first she refused; she wanted nothing to do with the devil’s music but in 1967 encouraged by Jay Barrett (later her manager), she put pen to paper. Recording mainly Barrett-penned songs, Jeanette believed a successful career beckoned but Kulka wasn’t too impressed with the results and failed to place the recordings with any established labels.

Ever-persistent Mr K then had Jeanette put vocals over pre-recorded backing tracks – one from H B Barnum. no less. But still success remained elusive. Then the singer was set to work with singer/songwriter Wally Cox and two cuts were issued as a single on Golden State, even though Kulka lacked a distributor. Eventually Kent/Modern showed a little interest – but the interest bore no fruit.

Through all this Jeanette Jones was still fronting the Voices Of Victory who were to cut more sides at Golden State but as that ensemble lost momentum, it seems that Jeanette quit to join Mike Bloomfield’s Mill Valley Bunch project before voicing an ad campaign for (oddly) Swiss Colony Wine! Then nothing… even with the wonders of the internet soul detectives have failed to uncover much more.

What we do have are the Golden State Recordings and over the years Ace/Kent, who own the rights, have issued odd Jeanette Jones tracks on various compilations while more recently they issued a vinyl LP of the lady’s 12 solo songs. Now Australian label, Playback, treat us (on CD) to what they believe is the whole of her catalogue. That’s to say, the 12 solo songs, the six she fronted with the Voices of Victory and a couple she cut with the Mill valley Bunch.

Outstanding track is the deep soul classic ‘What have You Got To Gain By Losing Me’. The Gerry Goffin/Barry Goldberg song is a perfect vehicle for Jeanette Jones’ gospel-reared, true soul voice. Wally Cox’s ‘The Thought Of You’ offers more of the same passion and pathos but in truth, dip in anywhere here and hear a remarkable voice … a voice that so impressed Leo Kulka so much back in 1965. What a pity he lacked the resources and contacts to do really big things with it!