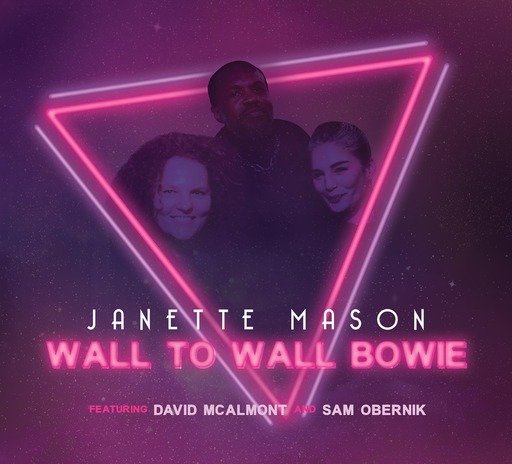 One of the UK’s most versatile pianists, who can switch effortlessly between jazz, rock and pop styles, Bushey-born Janette Mason‘s love affair with David Bowie began when she was barely a teenager; already smitten with the “Thin White Duke’s” music after hearing his ‘Sound + Vision’ single, she snuck into a local cinema to see him in Nicholas Roeg’s edgy 1977 sci-fi movie,  the X-rated The Man Who Fell To Earth. Although Mason went on to become a highly respected jazz pianist with four acclaimed solo albums under her belt, her passion for the singer/songwriter whose many stage personas included Ziggy Stardust never diminished and in 2020, her career saw her joined Bowie producer Tony Visconti’s supergroup, Holy Holy, alongside former Spiders Of Mars’ drummer Woody Woodmansey.

The seeds for ‘Wall To Wall Bowie’ – the pianist’s new five-track EP now available on 10″ vinyl, CD and in download format – were sown in 2013 when the pianist teamed up with the extraordinarily gifted vocalist David McAlmont for a Bowie night at London’s Hideaway club. A year later, Mason and McAlmont joined forces in the studio to record Bowie’s ‘Lady Grinning Soul’ for the pianist’s  ‘D’Ranged’ album and now, in 2021, they can be heard together again on ‘Wall To Wall Bowie.’

Noted for his silky, elastic vocals, McAlmont fronts four tracks; ‘Starman,’ ‘The Jean Genie,’ ‘Fame’ and ‘Suffragette City.’ They are not karaoke-like, note-for-note replications of Bowie’s originals but imaginative deconstructions that frame the song’s familiar melodies with novel musical backdrops. The opener, ‘The Jean Genie,’ was originally a chugging bluesy rocker but is turned into a slice of tightly syncopated fusion-esque funk while ‘Starman’ – another classic early ’70s Bowie cut – is stunningly transformed into a beautifully meditative piano-led ballad that highlights the soulful and dramatic brilliance of McAlmont vocals.  ‘Fame’ is also given a fresh twist; flipped into a kinetic chunk of jazz-inflected funk that is with snaking solo by Mason and guitarist Rob Harris. In its original form, ‘Suffragette City’ is a pounding rocker but Mason and her crew bring it down in tempo a few notches, giving it a laidback, almost southern rock-style makeover.

The EP closes with an evocative version of an antique jazz standard: Dimitri Tiomkin and Ned Washington’s ‘Wild Is The Wind,’ a movie tune that both Johnny Mathis and Nina Simone made famous. Bowie’s recorded it on his album 1976 ‘Station To Station’ and took the song to an even wider audience. Mason’s version opens with delicate piano chords before Dublin-born chanteuse Sam Obernik’s expressive voice wafts over the soft accompaniment. The pianist’s arrangement offers a sublime musical touch via the presence of harmonica player Graham Pike, whose solo adds a sense of poignancy.

Mason’s love for Bowie burns brightly on this enterprising, highly enjoyable EP; more importantly, perhaps, the record highlights the pianist’s ingenuity as an arranger and her ability to reconfigure well-known songs into fresh and surprising musical landscapes. Let’s hope her follow-up record is a full album devoted to Bowie songs.

The EP is available from June 25th: http://www.janettemason.com/products