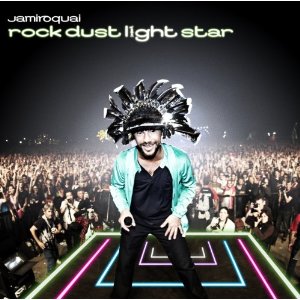 It’s been 5 years since Jamiroquai’s last album and a hefty 18 years since their debut and who’d have thought back then that by 2010 they’d have a cut played to death on Radio 2. That’s right, this new album’s featured laid back moment – ‘Blue Skies’ – has been “Record on the Week” on the staid old broadcaster and it’s so easy to hear why. The song is a beautiful slab of smooth soul with an optimistic (some might say clichéd) lyric and sweet strings. The morning stay-at-home listeners will readily identify with it and for those who grew up with Jay and his music they’ll think that he’s grown up and matured into his cardigan and slippers with them… or has he? ‘Blue Skies’ actually represents the only significantly “different” sound on the album; the rest is vintage Jamiroquai and as there’s more live instrumentation here than on ‘Dynamite’ it’s arguably even more “old school” Jamiroquai than that.

Take the   energized title cut – it’ll transport you right back to the early 90s both in its musicality and sentiment. ‘White Knuckle Ride’ and ‘Smoke And Mirrors’ offer more of the same – and maybe more so. ‘All Good In The Hood’ is another great thumper and the anti-drug ‘Hey Floyd’ has a generous feel of blaxploitation about it – right down to the sirens and the clink-chunk guitar. ‘Never Gonna Be Another’ is the album’s other big slowie –though this is considerably more soulful and doleful than the aforementioned ‘Blue Skies’ and again could have been recorded in the 90s.

So, with the exception of ‘Blue Skies’ (a great cut, by the way) ‘Rock Dust Light Star’ is proper vintage Jamiroquai – even the cover and that title itself are classics of their kind. Our little be-feathered friend’s fans will find everything as they’d expect … “classic” they’d call it. Less Jamiroquai-friendly listeners  might, however, reach for the adjective “dated”.