JAMES TAYLOR QUARTET: Closer To The Moon (Real Self) 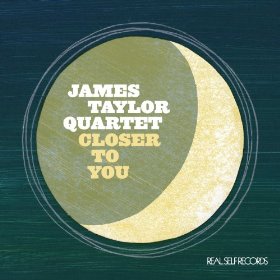 James Taylor is the UK’s premier organ grinder. With his various quartets he’s been around the music block more times than most and though he’s dabbled in all kinds of genres he always comes back to the sound he loves and is best known for –soul-jazz. On this new collection (released on his own label… a sign of the times, maybe?) there’s plenty of that signature sound. I’m thinking in particular of the busy ‘Don’t Pass Me By’ and the lovely ‘Fuzzburn’ which comes complete with authentic soul-jazz “live” effects.

Classic soul-jazz was never too far away from a certain kind of movie music – you know, dark, twisted physiological thrillers, spy flicks – even clever comedies (‘The Odd Couple’ anyone?) and here there are a  number of cuts that could have graced certain 60s movies. Try the opening ‘Tick Tock’ to hear what I mean. With ticking clock effects, tinkling bells, a walking bass line and Taylor’s sinister organ it’s right out of a ‘Get Carter’ type film – you can almost see the Technicolor, split screen opening credits. The LP’s title cut is cinematic too… almost a homage to John Barry, though the movie maestro probably wouldn’t have made the climax so complicated.

For variety there are some cuts that feature a vocal chorus. The best is ‘Night Walk’ on which the choral work reminded me of Ramsey Lewis’ ‘Sun Goddess’. And while we’re making comparisons, fans of the eerie organ sound of the Hank Levine/ Alan Haven classic ‘Image’ will love the enigmatically-titled ‘Spencer Takes A Trip’.

So far so good – all fairly typical JTQ. But as we said, JT loves to dabble and after playing with Nitin Sawhney at the Albert Hall, James decided to try his hand at classical music. Here he’s penned a trio of tunes that allow him to show off his classical piano virtuosity – ‘Proctor Quod Et Deus’, ‘Dark August’ and ‘Pearl’s Dance’. But to prove he’s really serious about the classical thing he also has a stab at Beethoven’s Piano Sonata Number 8, ‘Pathetique’. For those of you old enough to remember he turns it into a big ELP/Nice kind of bombast. Not sure what Beethoven would have thought!

Still breaking new ground, ‘Closer To The Moon’ features Taylor’s first vocal. The song is the lugubrious ‘Closer To You’ and he pitches his baritone between Richard Hawley and Scot Walker – but sadly his efforts lack the appeal of those two great crooners. Maybe it proves why James Taylor is – as we said up top – the UK’s premier organ grinder!