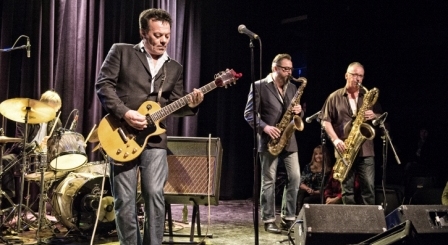 THE JAMES HUNTER SIX brought an end to their Spring, UK mini tour with a barn-storming show at Liverpool’s O2 Academy on Sunday 24th April. Over one and half hours Hunter showed how he wowed Van Morrison, proved he was a worthy Grammy nominee and displayed the old-school musicianship and craft that has endeared him to devotees of real soul and R&B.

The evening’s set list comprised mainly of tunes from the man’s most recent album – the Daptone issued ‘Hold On’ but there were classics from ‘Minute by Minute’ too –notably ‘Chicken Switch’ and ‘Let The Monkey Ride’. Interestingly on record, Hunter’s voice comes over as a cross between Sam Cooke and Ray Charles but live his delivery his wilder.. . a Jackie Wilson/James Brown hybrid with some sweet Billy Stewart style chirruping. Throughout, the Brown flavouring was accentuated by the tightly syncopated rhythm section and the punchy, parping saxes of Damian Hand and Lee Badau.

The show’s big cover was a version of the 5 Royales’ ‘Baby Don’t Do It’. James opined that the Royales were the “band that invented soul” and though purists might argue with that they wouldn’t quibble with his reading of their tune. Other highlights were the Northern flavoured ‘Stranded’ and ‘Gypsy’, which James informed was his re-write of Benny Spellman’s ‘Fortune Teller’. Best mellow moments were the gentle ‘This Is Where We Came In’ and the ska-tinged ‘Carina’. By and large though, the set was high energy all the way and Hunter now takes all that energy off to Europe and the States. Next chance to catch him in the UK is when he plays Suffolk’s Red Rooster Festival in June.

In the meantime catch our James Hunter interview in our interview archive while there’s a full review of ‘Hold On’ in our reviews section.