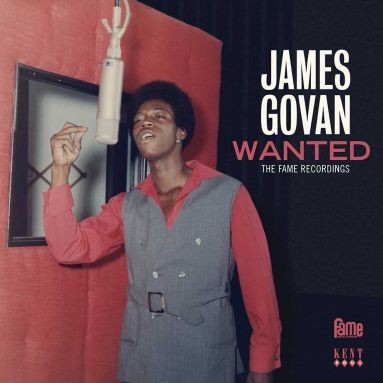 Otis Redding’s untimely death in 1967 left a huge void in the soul world and all kinds of music entrepreneurs were determined to find someone to fill the gap. One such was FAME’s Rick Hall and in Charleston-born James Govan he thought he’d found the man for the job. Govan had come to Memphis in his teens and he worked on the fringes of that city’s musical scene forging friendships with people like George Jackson and impressing club audiences with his vocal similarities to Otis Redding.

Hall, therefore, promptly signed Govan to FAME and cut 11 sides on him – releasing two singles. The first paired a re-tooled version of ‘Wanted; Lover (No Experience Necessary)’ with Hank William’s’ ‘Jambalaya’ while the second coupled George Harrison’s ‘Something’ with George Jackson’s ‘You Get A Lot To Like’. For all kinds of reasons the records were unsuccessful and the other tracks were never released. Then in 1972 Hall had Govan record another five songs, but again nothing was issued and James Govan went back to the club and lounge circuit where he was often billed as “Little Otis”. In the 1980s he cut more material without success but, unfazed, he’s still working in and around Memphis and he was even a regular at the annual Porretta Soul Festival where Italians pay their homage to Otis Redding.

Here Ace/Kent make all of Govan’s FAME recordings available for consumption and the 16 tracks make a great Southern soul album and you can make up your own minds why the singer never made it. My prognosis is that he sounded just too much like Otis Redding and maybe the punters just couldn’t handle it. Sure they wanted a new soul king but not one who sounded like the old one. Try Govan’s mournful reading of the standard ‘Bye Bye Blackbird’ to hear what I mean. It sounds exactly like Otis … ditto the version of Bob Dylan’s ‘I Shall Be Released’ or Rick Hall’s ‘I’ve Gone Too Far’ The vocal resemblance is uncanny… and whether you think that’s a good or bad thing is up to you. At least and at last Kent are giving us the opportunity to make up our minds.