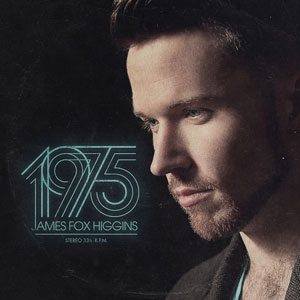 James Fox Higgins is an Australian musician with a penchant for old school soul. The music he makes though isn’t a karaoke style pastiche of old styles and sounds. Rather, his music is modern, edgy and totally contemporary – but it carries a huge respect for and knowledge of the sounds of soul’s golden age. Writers better with words than I am have dubbed him “the Antipodean Mayer Hawthorne” and a quick listen to Higgins’ latest 10 tracker underlines the veracity of that comparison. ‘1975’ is a great and honest homage to a particular moment in musical time but like broad-minded Mayer, James also dips his musical brush into palettes just outside the accepted boundaries of 70s soul.

The album’s big track is the title cut. It’s a brash, brassy slab of soulful nostalgia, name checking heroes like Curtis Mayfield, Stevie Wonder, Chaka Khan and Michael Jackson… even the Stones, John Lennon and the Bee Gees get a look in. It’s all topped with a cool, George Benson style guitar solo from Rex Goh. Other soul highlights include ‘Sun & Sea’ which references Rotary Connection’s ‘I Am The Black Gold Of The Sun’ and ‘Soul Train’- an unashamed tribute to the legendary Don Cornelius TV show.

‘That’s Not Right’ is a reggae-flavoured cut while the refreshing ‘Life In The Love Zone’ offers something different again. Here the influence is the West Coast harmony sounds of groups like Crosby, Stills and Nash and England Dan and John Ford Coley…. light and catchy. The atmosphere’s much more serious on ‘Stand Up’ and ‘Brothers There’s Still Time’. Higgins is a committed and high profile opponent of racism, discrimination and homophobia and both songs reflect his passion in fighting bigotry. That also maybe explains his decision to bravely cover Sam Cooke’s anthemic ‘A Change Is Gonna Come’. The song’s been recorded by dozens of artists across all kinds of genres and maybe only Otis Redding got anywhere near to matching Cooke’s stark original. Here Higgins is wise enough to steer clear of Southern soul style chest beating; rather he opts for a much smoother treatment – making it a great Quiet Storm moment. It works.

Find out more about Higgins and his passion for 1975 @ www.jamesfoxhiggins.com