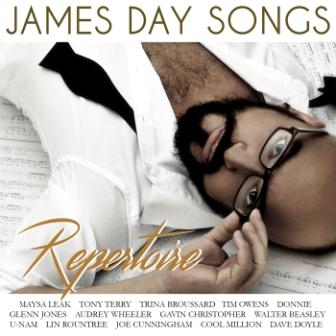 Modern soul connoisseurs know all about James Day. Over the years the songwriter/producer has produced a slew of classy soul cuts. Despite a serious ear disorder, which at one time led him to quit the music biz in desperation, James has gone on to win numerous awards including the Billboard Magazine and John Lennon International Song Contests as well as the Songwriter’s Hall of Fame Award for Songwriting Excellence which was presented by Hal David. David and Bacharach are particular heroes of Day and alongside Quincy Jones they provide him with the inspiration to craft proper songs and to think deeply about the production and arrangements to get the very best out the material.

Getting the best from the material also involves bringing in top artists to help him deliver, so on this concise new album Day has drafted in people like Tony Terry, Trina Broussard, Glenn Jones, Audrey Wheeler, Donnie, U-Nam, Walter Beasley, Lin Rountree and the incomparable Maysa. Ms Leak takes lead vocal on the album’s lead single the chugging, full on ‘We Dance’. The cut also features U-Nam on guitar and with the Cool Million team helping out you know you’ve got a classic modern soul groove.

U-Nam’s chinking guitar also features on the set’s big up moment ‘Don’t Waste The Pretty’. The vocal here comes courtesy of Glenn Jones, another recent Cool Million collaborator. Amongst the choice ballads is ‘Dance Again’ which features Tina Broussard. There’s another moment of poignancy on ‘Considered Delivered’. Here it’s not the song that’s particularly poignant (it’s a stately slow steppers outing) but rather the vocal from the late Gavin Christopher. Gavin passed away just after the album’s completion, so the cut stands as a fitting tribute to the talent that he was.

Several of the tracks on the set have been aired before (‘Rewind’ and ‘Natural Thing’ for instance) but here they’ve been tweaked or remixed and add much to James Day’s ‘Repertoire’.