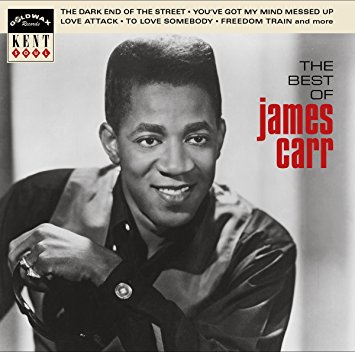 James Carr is the undoubted soul man’s soul man. Little known in the mainstream, he’s revered by connoisseurs – especially of the Southern persuasion. Much of that (deserved) reverence stems from his monumental and original reading of the iconic ‘Dark End Of The Street’. That Dan Penn/Chips Moman song is the aural definition of Southern soul and 2017 is the 50th anniversary of Carr’s Goldwax recording of the melancholic tale of illicit love. What better way to celebrate than with a retrospective of the very best recordings that James made for Quinton Claunch’s Memphis imprint? Now we know that reissue specialists, Ace/Kent have made all of Carr’s Goldwax recordings available already, but here, on this new 20 tracker we have the definitive overview of Carr’s art. It’s a perfect introduction to anyone who wants to become familiar with the singer and for those already in the know, it serves as a quick reminder of why he’s so revered.

The collection begins, of course, with ‘Dark End Of The Street’ and it’s still gripping. It’s one of those very few recordings where everything seems to come together perfectly; timeless and truly universal. Carr fans, of course, will tell you that there are lots more recording in the man’s repertoire just as searing – try ‘These Arms Of Mine’, ‘Life Turned Her That Way’ or ‘A Man Needs A Woman’ for starters.

Oddly, I think, for a Southern hero, James Carr also carved himself a niche on the Northern soul scene with tunes like ‘That’s What I Want To Know’ and ‘Freedom Train’ and those, of course, are included here.

‘The Best Of James Carr’ CD is out now – just perfect as a soul stocking filler – and we’re told that for those who like the modern way it also comes in that new fangled vinyl as a 12″ LP. There’s also a special 7″ pressing of ‘Dark End Of The Street’ with ‘You Got My Mind Messed Up’ on something called a B-side.

The sleeve notes offer a great pen picture of Carr while the art work evokes the spirit of the 60s/early 70s… soul perfection!