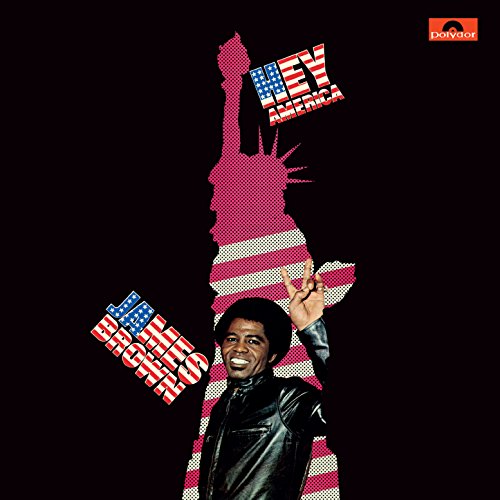 Not to be confused with “The Godfather’s” 1970 album of the same name – which was a Christmas-themed LP –  ‘Hey America’ is a reissue on both CD and vinyl LP of an ace but slightly oddball Italian James Brown compilation released by Polydor two years later in 1972. It begins, though, in a festive mood with the title song of “Mr Dynamite’s” aforementioned Yuletide offering, a funky Black Power anthem, which was divided into two sides for a single release. You get both sides consecutively sequenced here, with Part 2 being an instrumental version with string overdubs. Then follows two parts of the 1972 single  ‘I’m A Greedy Man,’ with Brown’s vocals counterpointed by Bobby Byrd and the JB’s blaring horns.  One of JB’s most explosive grooves in the early ’70s was the heavily-sampled ‘Soul Power,’ which also features here (though, strangely,  you don’t get its Part 2 flipside). Both sides of the  ‘Make It Funky’ 45, another much-sampled funk gem, makes an appearance, and you also get two further instalments, ‘My Part/Make It Funky’ Parts 3 (which is basically a Fred Wesley trombone solo) and 4.

Just when you think the album is devoted to unbridled funk, the compilers break up the flow with the pleading ballad, ‘I Cried,’ a Dave Matthews-arranged single (complete with horns, strings, and female backing vocals) that Brown wrote with Bobby Byrd. In a bizarre twist, the final three cuts on this compilation are “live” and all covers – funked-up versions of Jerry Butler and Betty Everett’s duet hit, ‘Let It Be Me,’ featuring Vicki Anderson, and Jimmy Webb’s ‘By The Time I Get To Phoenix,’ both taken from the faux live album, ‘Super Bad’ (a studio session with overdubbed audience applause) plus a version of ‘Kansas City’ recorded at the Apollo Theater in 1967.

Though in terms of its blend of material, ‘Hey America’ is a slightly eccentric compilation,  it’s still an enjoyable one to listen to and worth acquiring if you’re a hardcore James Brown fan. Good God!