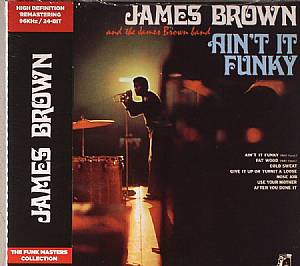 Here’s a collectors’ curio from the ‘Godfather of Soul’s’ huge canon that is often overlooked and underappreciated even by his staunchest fans.  ‘Ain’t It Funky’ is a largely instrumental 7-track album that he released in 1970 for King Records which finds Mr Dynamite getting down to it at the keys of a Hammond B-3 organ. It recycles several of Brown’s totemic funk tunes including ‘Cold Sweat,’ the song that became the singer’s blueprint for his revolutionary funk manifesto in 1967.

The album’s opener is a nine-minute version of another big US R&B hit, ‘Ain’t It Funky Now’ (which made #3 in the US R&B charts in November 1969). It’s leaner and meaner than the original 45 version, with Jimmy ‘Chank’ Nolen’s  scything guitar over the one-chord vamp creating a nail-biting sense of tension. On top of this, Brown drops some bluesy organ licks. He’s patently no Jimmy Smith but he plays mighty soulfully. ‘Fat Wood’ is a bluesy horn-led shuffle where the Godfather enjoys an extended solo feature on the organ, his Hammond fills counterpointed by blaring brass. The instrumental version of ‘Cold Sweat’ spotlights guitar as the lead instrument and also features some jabbing sax from the incomparable Maceo Parker. The funk gets even harder on the driving, ‘Give It Up Or Turnit A Loose,’ where Brown’s voice is replaced by lead guitar. ‘Nose Job’ is a short brassy R&B groove  while ‘Use Your Mother’ is a frenetic funk workout. The album’s horn-drenched closing cut is called ‘After You Done It’ but, in fact, it’s an instrumental version of Marva Whitney’s single, ‘I Made A Mistake Because It’s Only You.’

While this is not one of James Brown’s most essential LPs, if you’re a funk fanatic who came across ‘Soul Brother Number One’s’ music via the hip-hop side of town, then the much-sampled ‘Ain’t It Funky’ is well-worth adding to your collection, especially as it spotlights the well-oiled machine that was Brown’s band.

This new edition from France’s reissue specialist, Culture Factory, is the first time the album has appeared on CD outside of Japan and sonically is undoubtedly the best one yet – it’s remastered in hi-definition audio at 96KHz/24-bit and comes in a sturdy mini-replica cardboard LP sleeve complete with a Japanese-style obi-strip. The title, by the way, isn’t a question. It’s a statement of fact. Good God!