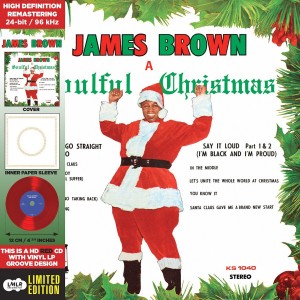 Apparently, James Brown loved Christmas – so much, it could be argued, that he even decided to check out on Christmas Day. But seriously, he often did charitable work on the 25th December, handing out turkeys to the impoverished denizens of America’s black ghettos (and it was a tradition that he maintained right up until his death). This was his second, and arguably best, Yuletide album. It was issued in 1968 on King when the Godfather’s music was in a transitional phase, moving towards the harder funk style initiated by 1967’s ‘Cold Sweat’ and which would define his sound  in the coming decade. Remastered in high definition (that’s 24-bit/96kHz to the bat-eared audiophiles out there), ‘A Soulful Christmas’ is pressed up on a festive, red CD that’s as shiny as Rudolph’s nose and presented in a mini-facsimile of the original LP sleeve complete with a Japanese-style OBI strip. Needless to say, it both sounds and looks good. But what about the quality of the music? Well, though the Godfather’s LPs could be patchy in the ’60s, ‘A Soulful Christmas’ is a consistent effort that’s stuffed with good tunes (and even the obligatory filler is of good quality).

The opener, ‘Santa Claus Goes Straight To The Ghetto,’ with its addictive shuffle groove  is a bonafide holiday classic and so too is the set’s best cut, the funked-up title song features Maceo Parker’s jabbing sax. ‘Santa Claus, Santa Claus’ is a pleading, blues-infused ballad that channels the gospel fervour of ‘Try Me’ and ‘Please Please Please’ while ‘Christmas Is Coming’ is a funky instrumental (in the vein of ‘Cold Sweat’) peppered with stabbing horns and jazzy vibes. A similar arrangement, with  a tinkling vibraphone to the fore, manifests itself on the infectious ‘Believers Shall Enjoy (Non Believers Shall Suffer).’ Another funkafied instrumental, ‘Christmas Is Coming,’ is another strong showcase highlighting the interlocking, rhythmic cohesion  of Brown’s band (led by Alfred ‘Pee Wee’ Ellis at that point). James Brown returns on  ‘Let’s Unite At Christmas,’ a smooth ballad with a message of harmony and togetherness. As regards the ‘filler,’ mentioned earlier, Brown included his then latest hit, the anthemic ‘Say It Loud – I’m Black & I’m Proud’ on the album as well as an instrumental cut called ‘In The Middle’ (which also appeared on Marva Whitney’s ‘It’s My Thing’ album and Brown’s ‘The Popcorn’ LP, both released in 1969).

If you’re a fan of The Godfather of Soul or a serious funk and soul disciple you’ll need to own this. It’s a genuine Christmas cracker that knocks the stuffing out of other seasonal albums. A serious stocking filler.