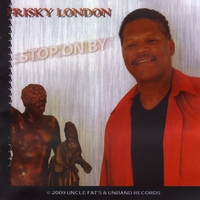 James Brittan is a soul singer from Columbus, Ohio and he rejoices in the alter ego “Frisky London”. It seems that he’s always on the move – hence “frisky” and the “London” bit is a pun on his surname! He’s recorded under both names and to confuse matters this 11 tracker bears both monikers! He’s been making music since the mid 70s and he also finds the time to act and work the gospel circuit –though this album is purely secular. Sadly though it suffers from the same problems that too many indie soul albums suffer with. The main bug-bear is, of course, money. Recording costs big bucks and if you don’t have them it usually shows. Case in point here is James’ treatment of Kem’s ‘I Can’t Stop Loving You’. The original is big and polished; clear and crisp. Here, though, you can almost hear the creaking of the budgetary constraints … and the story is repeated throughout the set.

That’s not so say this is a bad album. James has a decent soul voice – which betrays his years of varied experience. In places he has a sound of Al Jarreau – most obvious on a cover of George Duke’s ‘Say Hello’. Here he kind of slurs part of his delivery in that typical Jarreau way. George Duke is clearly a favourite of Mr. Brittan’s. He covers another of his tunes – ‘It’s Summertime’ – but it doesn’t quiet come off. Other covers include takes on Bill Withers’ ‘She’s Lonely’ and Randy Newman’s ‘Baltimore’. That one’s quiet a brave attempt and the producer gives it an almost Caribbean lilt. There’s a similar feel to the LP’s best cut – ‘Stop On By’… in places it’s almost jazzy. The album’s completed by a number of ponderous ballads, some of which are enlivened by neat sax work from Gene Walker. If you want to investigate further, the album’s currently available on CD Baby.