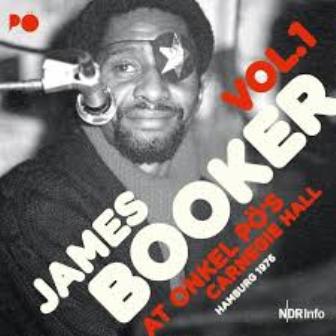 James Carroll Booker was one of blues music’s more flamboyant and wildest performers. No less a person that Dr John described him as “the best black, gay, one-eyed junkie piano genius New Orleans has ever produced.” Others called him “the Black Liberace” and those descriptions just about sum him up!

Hugely talented, he developed a unique style that melded blues, R&B and jazz but addiction problems denied him making the mark that his abilities merited and when he died in 1983 waiting in a wheelchair for attention in the ER room at a New Orleans charity hospital, his many fans wondered what might have been if his life trajectory had been different.

If you’re not familiar with his work this “new” live album will bring you up to speed. It was recorded at Hamburg’s famous Onkel Po’s, Carnegie Hall nightspot in 1976 and offers a snapshot of Booker’s art. The set is a mix of songs by many off his heroes… people like Ray Charles, Fats Domino, Allen Toussaint, Percy Mayfield and Jimmy Witherspoon alongside a clutch of originals like ‘Classified’ and ‘One Hell Of A Nerve’. All are delivered in his laconic, laid back vocal style underpinned by his percussive, barrel house style piano playing. Best example is probably his medley of ‘Lonely Avenue’ and ‘Stormy Monday’. On it he’s clearly having a ball – as indeed he is throughout the 72 minute set.

Booker worked in Europe between 1976 and ’78; there, he felt more appreciated than in his homeland. However, he returned to the States in ’78 and found a gig as house pianist in a New Orleans bar. He recorded a couple of poorly received albums but he always felt sorely underappreciated. Consequently, his addictions took a more severe hold leading to his eventual death. This album shows James Booker at his best and it’s out now.