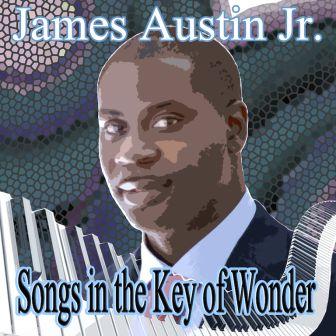 Stevie Wonder’s glorious back catalogue has been plundered countless times by musicians across all genres seeking something of beauty and meaning on which to display their chops. Latest to dip into Stevie’s bag is award winning pianist James Austin Jr.

Austin hails from Chicago but now works out of New York. Back n 2006 he won the Thelonius Monk Institute of Jazz International Piano Competition at the Smithsonian Institute in Washington, D.C. That day, he met many of his music heroes – Quincy Jones, Herbie Hancock and George Duke but a certain Stevie Wonder left him in thrall and so for his debut album as leader James Austin has decided to offer ten of his interpretations of Wonder songs. He explains: “Stevie Wonder has written every type of song you can imagine and it’s all beautiful music. I’ve been playing and arranging Stevie’s songs in improvisational idioms for some time. Whenever I threw one into a gig, audiences were keenly receptive…and my objective is to connect with the widest audience possible.”

‘Songs In The Key Of Wonder’, then, begins with a gorgeous version of ‘Isn’t She Lovely’ and you know from the opening bars that this album isn’t going to be just a pedestrian take on the Wonder songbook. This ‘Isn’t She Lovely’ is serious stuff: it really swings as Austin allows his side men – notably horn players Jarrard Harris and Ben Rubens to stretch out. Why even drummer Samuel Torres gets a mini solo! Versions of ‘Part Time Lover’ and ‘You Are The Sunshine Of My Life’ offer more of the same gently swinging flavours while ‘My Cherie Amour’ is treated to a classic trio makeover… very Ramsey Lewis!

The other featured tunes are ‘Another Star’, ‘You Got It Bad Girl’, ‘Golden Lady’, ‘Overjoyed’, ‘Tuesday Heartbreak’ and ‘Lately’ which closes the album. An album highlight, this ‘Lately’ features just Austin’s piano and David Williams’ upright bass and even without the lyrics it will still manage to wring those emotions.

Since relocating to New York, James Austin has made his name as an in-demand session player and accompanist. He’s worked with people like Lalah Hathaway, Brian McKnight, BeBe Winans, Yolanda Adams and Russell Malone. Now, with ‘Songs In The Key Of Wonder’, he’s emphatically announced his arrival as a leader in his own right!