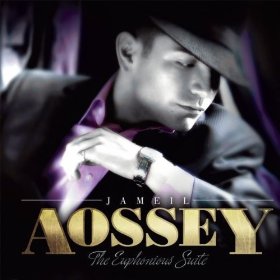 Jameil Aossey works out of Ohio and like so many soul artists these days runs his own label to make sure that the music that he wants to create gets out there in the way he wants it to. It’s clear that Jameil would have had difficulty placing this set with any major label because ‘The Euphonius Suite’ doesn’t fit any of the current templates which big company music execs want their product to be crafted from. Even that title would have the suits panicking ‘cos it speaks of ambition and concept and yes – something markedly different to the norm. Indeed Jameil’s album is different to anything around at the moment but that doesn’t make it any the less worthwhile and the set offers a lot more commitment and craft than much of the current popular soul and R&B crop.

First that album title… ‘Euphonius’, we’re told means “pleasing to the ear” and the album’s 12 tracks do form an ordered series of movements (a suite) and I guess a good point of reference would be Maxwell’s famed ‘Urban Hang Suite’. Indeed throughout Aossey’s set you’ll be constantly reminded of Maxwell. The music is multi-layered, the lyrics are often obtuse, the vocals are styled similarly, the tracks blend into each other and instrumentals crop up where you might not expect them. One cut- ‘Dreamin’ has a real feel of ‘Don’t Ever Wonder’ too – so either consciously or unconsciously Maxwell has played a part here. That said Aossey’s presentation is markedly different to Maxwell’s. I hesitate to use the word “rap” but a lot of Jameil’s work is part spoken …. rhythmically. It’s not hard core, aggressive R&B style rapping but there are elements of the contemporary about it. Hopefully, it won’t put too many anti-rap modern soulsters off, because ‘The Euphonius Suite’ has a lot to offer. We’ve already mentioned the lovely ‘Dreamin”, but ‘Melodies’ has a lot going for it too. This one’s a truly laid back Marvin Gaye style groove with some delicious sax work from Andre Matthews.

Elsewhere ‘Classy’ segues sweetly into ‘Koolwhip’ while ‘The Cigar Groove’ is a laid back instrumental – different to the Ernie Isley-esque jam, ‘The Closing Groove’ which brings ‘The Euphonius Suite’ to a conclusion. The LP’s an ambitious project and – and as its title implies, it is ‘pleasing to the ear’… worth investigating for those who seek something a little different from their soul music.