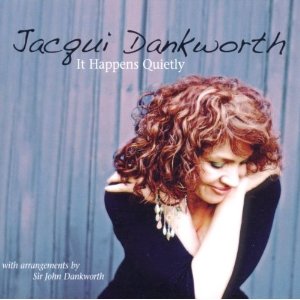 Jacqui Dankworth is the daughter of Johnny Dankworth and Cleo Laine and without too much fuss (given her lineage) she’s now regarded as one of the UK’s premier jazz voices and this new 12 tracker won’t do that reputation any harm at all.

Jacqui has made the aptly-titled album as homage to her father. He died in February 2010, but despite his failing health he worked on the arrangements and contributed two songs – the haunting title cut and ‘The Man’. For the latter, producer Tony Platt inserted a sax solo which John had recorded some years ago and it perfectly matches the key and tempo Jacqui uses on the song. In essence, it’s Sir John’s last performance on record. Though ‘The Man’ and ‘It Happens Quietly’ are “new” songs they dovetail beautifully with the rest of the material – standards all. Jacqui eschews all flamboyance and allows her purity of tone to underline the classic beauty of material like ‘A Nightingale Sang In Berkeley Square’, ‘At Last’, ‘I’m Glad There’s You’ and ‘The Folks who Live On The Hill’.

Throughout she’s supported by some stellar performances – notably from her bassist brother, Alec, and sax man Tim Garland. The live strings (contracted by Sally Herbert) add just the right amount of elegance and refinement and the package is completed with some touching, personal notes from Rod Argent. It’s clear that the Dankworth dynasty is entering a new phase.