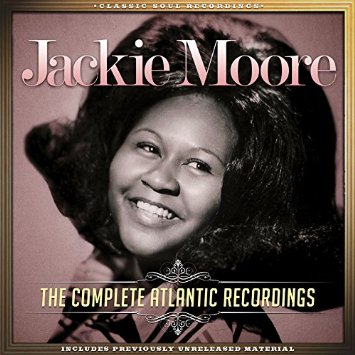 The latest collaboration between Real Gone Music, Rhino and SoulMusic Records turns the spotlight on Florida-born diva, Jackie Moore. More specifically it collects together all the recordings she made for Atlantic in the 70s – a time most people would acknowledge (Jackie included) as her peak.

Born in 1946 in Jacksonville, Florida Ms Moore harboured singing ambitions from an early age and regularly entered local talent shows. Then, aged just 17, she travelled to Detroit to audition for Motown. Rejection didn’t dampen her enthusiasm and in 1964 she moved across to Philadelphia, where, after pestering hot shot producer, Bobby Martin, she won a deal with Jimmy Bishop’s Arctic Records. She didn’t score any hits there but luck stepped in when Bishop’s wife, Louise, persuaded Jerry Wexler to sign the singer to Atlantic (Wexler was a close friend of Louie Bishop) and, importantly, they persuaded Wexler to allow Jackie to record with her old mentor, Dave Crawford down at the Criteria Studios in Miami.

Backed by the Dixie Flyers, they created the lovely ‘Precious, Precious’ which rightly flew into the charts; Jackie Moore was on her way and more hits flowed – notably ‘Darling Baby’ (a re-tread of the Elgins’ classic), ‘Time’ (with BVs from the Sweet Inspirations), ‘Sweet Charlie Babe’ and ‘Both Ends Against The Middle’ – those last two recorded in Philadelphia and both representing the perfect marriage of Southern soul commitment and urban sophistication.

In 1974 Atlantic issued an album on Jackie Moore. Titled for the ‘Sweet Charlie Babe’ hit, it cobbled together her singles along with the B sides, and though it charted Jackie was disappointed that Atlantic kept much of her fresher material in the can. Tensions grew and in 1975 Jackie and Atlantic went their separate ways. She went onto record for Columbia but failed to find further success and by the end of the 80s she had fallen off the soul radar.

This wonderful 2 CD album shows Jackie Moore at her peak. Naturally it contains all those hits and everything from her sole Atlantic album. The real treasures though are the previously unreleased cuts. These include a mighty version of the Philly song ‘Joe’ (best known via Dusty Springfield’s version) and a great tune called ‘I Just Started’ which features some fabulous counterpoint harmonies from the Sweet Inspirations. Add to the music a typically incisive essay from SJF colleague Charles Waring and you have one great soul retrospective that, quite simply, is essential.