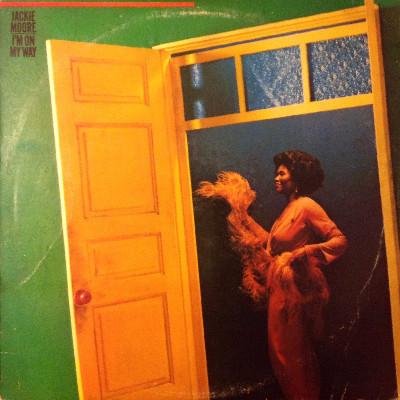 Jacksonville’s Jackie Moore is revered by soul collectors for her signature sounds – ‘Precious, Precious’, ‘Sweet Charlie Babe’ and ‘Both End Against The Middle’. Pacted to Atlantic and working chiefly with Dave Crawford, Jackie delivered everything in a passionate southern fashion though her work was maybe a little glossier than what you might expect from the southern studios. After Atlantic Ms Moore moved on to work with Brad Shapiro at Kayvette before pitching up at Columbia in the late 70s. There the execs paired her with Philadelphia’s Bobby Eli. The Philly guitarist/arranger/producer had already worked with Jackie at Atlantic (he and the team at Sigma Sound had provided the sweetening on things like ‘Both End Against The Middle’) and between them they crafted the long player ‘I’m On My Way’ which was released on Columbia in 1979.

The long-neglected album has just won reissue on bbr Records and as you’d expect from the above and the date of issue, the 8 tracker was/is a great example of the sweet Philly soul sound. All the usual Philly suspects are on board…. including Don Renaldo and his strings and with Jackie’s southern-bred vocals riding on top there’s nothing not to like.

On offer? Well, there are plenty of swinging disco items…. amongst them the charting ‘This Time Baby’, ‘Can You Tell Me Why’ and ‘How’s Your Love Life Baby’ and some great ballads – the best of which is the quite lovely ‘Joe’. Jackie had originally recorded the song at Atlantic and here Eli resurrects it beautifully. Crate diggers are well advised to seek out dear Dusty Springfield’s version too.

This reissue offers up the album’s original 8 cuts alongside 6 “bonuses” – different mixes of ‘This Time Baby’ and ‘How’s Your Love Life Baby’. Dancers will love ’em all especially Mike Mauro’s 9 minute re-working of the former.