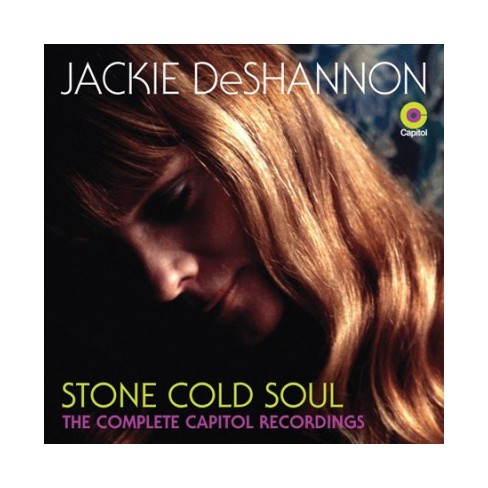 Originally from Hazel, Kentucky, Jackie DeShannon started her recording career as a precociously-talented teenager in the late 1950s but it wasn’t until the following decade that the singer born  Sharon Lee Myers started making an impact on the US pop charts, racking up a slew of chart entries for the Liberty/Imperial labels between 1961 and 1970. Her two biggest hits were  ‘What The World Needs Now’ from 1965, and ‘Put A Little Love In Your Heart,’ recorded four years later. But when 1970 arrived – ushering in the age of the singer/songwriter –  DeShannon, whose recordings had become increasingly soul-influenced,  was seeking a change of direction, and opted to join Capitol Records as 1971 approached. It proved to be a brief stop, with the singer/songwriter  releasing a lone album for the label (‘Songs,’ issued in June 1971) before being poached by Atlantic Records’ Jerry Wexler.

This new 25-track retrospective offers us an opportunity to re-evaluate Jackie DeShannon’s brief spell at Capitol Records. It proves to be a revelatory archival discovery – one that reveals that the former pop princess was morphing into a rootsy, southern soul sister. Capitol initially sent her down to Memphis in January 1971 to record at producer Chip Moman’s American Sound Studios, a veritable southern hit factory that had produced chart smashes for Elvis Presley, Aretha Franklin, Dusty Springfield and Neil Diamond in the late ’60s. The sessions yielded an album’s worth of material helmed by Moman using the formidable talents of the studio’s ace session crew (guitarist Reggie Young, keyboardists Bobby Emmons and Bobby Wood, drummer Gene Chrisman) but Capitol rejected after the single, ‘Stone Cold Soul’ (co-written by Mark James, who wrote ‘Suspicious Minds’) failed to take off. They canned all of the remaining Memphis material, except the jaunty, Kurt Weill-influenced cabaret song, ‘Show Me,’ which ended up on DeShannon’s eventual LP for the label, ‘Songs,’ recorded during April ’71 in California.

Though ‘Songs’ (whose content is mainly included towards the tail-end of this set) is a good album (its main highlight being Bob Dylan’s ‘Lay Lady Lay,’ reconfigured as ‘Lay Baby Lay’), the rejected Memphis tracks helmed by Moman form the most impressive part of this compilation which includes five never-released-before tracks. They show how much DeShannon had developed as a vocalist since her pop days at Imperial. Her voice is husky and soulful, blending gospel, blues, and  Americana elements into a singular style. She really impresses on an all-too-short version of William Bell’s ‘Don’t Miss Your Water,’ which offers tantalising taster of what she can do. The Goffin-King ballad, ‘Child Of Mine,’ is recast as a country ballad with gospel inflections and she also delivers fine interpretations of songs by George Harrison (‘Isn’t It A Pity’), Van Morrison (a terrific version of ‘And It Stoned Me’), Spooner Oldham and Dan Penn (‘Sweet Inspiration,’ where DeShannon’s vocals are counterpointed by responses from a gospel choir), Arlo Guthrie (‘Gabriel’s Mother’s Highway’), and Emitt Rhodes (the anthemic ‘Live Till You Die’). DeShannon also submits some fine self-penned material in the shape of the plaintive  ‘Now That The Desert Is Blooming’ (she also contributed ‘Bad Water, ‘Salinas,’ and ‘West Virginia Mine’ on the ‘Songs’ album).

Hats off, then, to Real Gone for making available all of Ms. DeShannon’s Capitol sides for the first time ever. It’s a thoroughly engaging set that anticipates the singer/songwriter style of her much-lauded Atlantic output of the early ’70s.