JACKIE DAY: Dig It The Most (Kent) 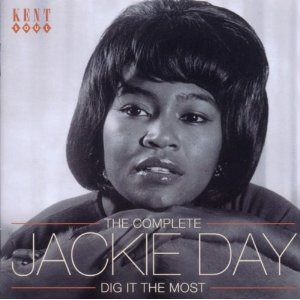 In soul histories, Arkansas’ Jackie Day doesn’t even merit a footnote. Born Jacqueline Mary Baldain in 1938, she is one of thousands of soul music wannabees… singers who dreamed the dream but for whom the break, the luck, the real deal, the right opportunity never came knocking. Like many before (and no doubt still to come) she’s known chiefly for one relatively obscure 60s recording that found its way onto the Northern soul scene. The song, ‘Naughty Boy’, has all the classic “Northern” ingredients … it’s so, so pacey; its sound is tinny and echoey; the lyrics are banal and centred on dancing; the beat is madly insistent; there’s a wild backing track; and – maybe most importantly of all – it’s rare (on the obscure Phelectron label, if you must know).

Well, it was rare –but now collectors who aren’t lottery winners can enjoy its rustic beauty as it takes centre stage on this retrospective of Jackie’s career. The 20 tracker brings together all the lady’s recordings and though, sadly it’s come too late for her to enjoy any kudos from it (she died in 2007) hopefully, it might – at least – get her a footnote in those soul histories. Ms. Day – mentored by her husband Big Jay McNeely and then Maxwell Davis (both great sax men) – recorded for a number of labels… the aforementioned Phelectron, Music City, Modern and Specialty amongst them – but she never enjoyed more than local success. Why? Well, she was a great vocalist and she cut some fine songs with great productions; it simply seems that the key factors listed up top all conspired against her.

Here the Northern crew will find lots to cherish – notably ‘Before It’s Too Late,’ ‘Long As I Got My Baby’ and ‘Oh What Heartache’, while on ‘Without A Love’ and ‘Free At last’ she proved that she could “do” big ballads as well as anyone. The set boasts four previously unreleased cuts too – two of them are odd versions of ‘Don’t Fence Me In’ and ‘You Are My Sunshine’. They were recorded for Ray Dobard’s Music City label and are quite out of kilter with the rest of the material; though that probably says more about the idiosyncratic Dobard than Ms. Day…. who, just to repeat the point, really does deserve at least that footnote.